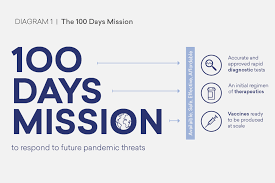 SIX years after its founding and three years after COVID-19 broke out in China, leading members of the Coalition for Epidemic Preparedness and Innovations, CEPI, and world leaders gathered at the 53rd World Economic Forum Annual Meeting in Davos to discuss what key lessons had been learned from the pandemic.

They focused on how to improve the record-breaking speed of COVID vaccine development and rollout, and how to overcome political obstacles to ensure vaccines are made more readily available to all.

While the time between the release of the SARS-CoV 2 genetic sequence and the first emergency authorization of Pfizer-BioNTech’s mRNA vaccine was only 326 days, CEPI has set the ambitious goal of compressing that interval to only 100 days. Richard Hatchett, CEO of CEPI, said: “To be able to deliver vaccines to new threats within 100 days – that would give us a fighting shot of preventing pandemics altogether and certainly of reducing their impact.”

Hatchett identified the uneven distribution of vaccine manufacturing capacity as an important root cause of that inequity. “But the other root cause of the inequity was scarcity,” he added. “Where there is scarcity there will be inequity. And that’s the driver of the 100 days’ mission.”

Hatchett also announced a new partnership between CEPI – an alliance to finance and coordinate the development of new vaccines to prevent and contain infectious disease epidemics – and the Institut Pasteur Dakar, which will build a modern, modular flexible manufacturing facility in Dakar to deliver vaccines across the African continent. “It’s the first of a manufacturing network of developing country manufacturers that CEPI has announced,” he said.

Public health expenditures in the Global South remain low by developed world standards, as Silvino Augusto José Moreno, Mozambique’s Minister of Industry and Trade, pointed out. Noting that 1.2 billion of Africa’s 1.4 billion people live in sub Saharan Africa, he said that expenditure on health in the region amount to less than 2% of government spending.

Keeping political focus on pandemic response has proven difficult and will continue to pose challenges to governments and public health authorities. “When we wrote the Independent Panel for Preparedness and Response Report, we were very conscious that there had been 16 previous such reports and commissions, who wrote with recommendations, most of which sat on a shelf,” said Helen Clark, Prime Minister of New Zealand (1999-2008). “It was very easy to enter a cycle of panic, then neglect, as the immediate heat of the storm passed.”

Tony Blair, Prime Minister of the UK (1997-2007), said: “If you want the politicians to focus, they need to think, ‘Look, this is coming down the track soon’. If you tell them about a future pandemic, they’ll kind of go, ‘Yeah, maybe it’s someone else’s problem.’ But if you tell them, actually, in the next few years you’re going to have the opportunity to make a big difference to the healthcare of your population that will focus them.”

Albert Bourla, CEO of Pfizer, contrasted his company’s scientific and logistical feat in introducing the COVID-19 vaccine with the politicization that surrounded public health measures, including controversies over masks and vaccines.

Bourla is optimistic about the ability to meet future challenges – and the challenge of diseases that have been with humankind for a long time. “If we were able to do it in COVID, why can we not repeat this in Alzheimer’s, in cancer, in Parkinson’s, or many other diseases?”