Leah Sharibu: One Year in Captivity

As the day rolls by and hope appears to be fading, Nigerians who care about Leah Sharibu, the abducted Dapchi School girl, are not relenting in asking President Muhammadu Buhari to fulfil his promise to rescue her from Boko Haram captivity, even as the first year anniversary of her abduction draws near

By Olu Ojewale PERHAPS, if not for the rumour of her death, which circulated in the social media recently, the Nigerian government, appeared to have forgotten about Leah Sharibu, the abducted Dapchi School girl kidnapped with others about a year ago. Sharibu whose mates with whom she was adopted that fateful day in February last year, were released a month after, will be a year in the Boko Haram captivity on Tuesday, February 19. Sharibu's captivity started on Monday, February 19, 2018, at about 5:30pm, when 110 schoolgirls aged 11ľ19 years old were kidnapped by the Boko Haram terrorist group from the Government Girls' Science and Technical College, GGSTC, Dapchi, located in Bulabulin, Yunusari Local Government area of Yobe State, in the North-East part of Nigeria. On Wednesday, March 21, 104 of the girls were returned by their captors, five had died, while one remained in captivity. Ever since, Sharibu has remained in captivity all because she refused to convert from Christianity to Islam as demanded by her captors. A 14-year-old girl, who is still in her formative years, has been suffering for her refusal to abandon Christianity and embrace a new faith. To add to her fate, her captors have said severally that she would be their slave and also threatened to kill her. [caption id="attachment_122335" align="alignright" width="300"]

Buhari[/caption] Indeed, in September, last year, the Boko Haram sect killed Saifura Khorsa, one of the health workers kidnapped from Kala-Balge, Borno State. She was a midwife with the International Committee of Red Cross, ICRC. In a video seen byáThe Cable,áan online newspaper, the deceased who was wearing a white hijab was shot from behind. In the video, the sect also threatened to kill Hauwa Liman and Alice Ngaddah who were abducted alongside Khorsa in March 2018, as well as Leah Sharibu. Liman and Ngaddah, a mother of two, who worked with United Nations International Children Fund, were the ones in captivity among the three people abducted in Rann on March 1. It was on the video that the spokesman of the group promised to kill the health workers and Leah Sharibu. ôThe other nurse and midwife will be executed in a similar manner in one month, including Leah Sharibu,ö the sect threatened. Making good of its promise, in October, Liman, a worker of the ICRC was, indeed, killed as threatened by the fundamentalists. So, when the social media reported that Sharibu had been killed, it was understandably too much for Rebecca Sharibu, her mother, to take in. Hence, she cried out on Saturday, February 9, calling out to President Muhammadu Buhari to fulfil his promise to the family by getting her daughter released. Tearfully addressing a press conference in Abuja, she noted that February 19, will make it exactly a year that her daughter was abducted. Speaking in Hausa, she pleaded that Buhari should do everything possible to ensure the release and safe return of her daughter. She recalled how Buhari had spoken with her on phone and assured her of Leah Sharibuĺs release. ôThe president spoke with me on phone and encouraged me not to worry, and with the assurance that my daughter will be released. Three ministerĺs also visited me and gave me assurance but till today, I havenĺt heard anything, hence my coming before you to plead. [caption id="attachment_134079" align="alignright" width="300"] 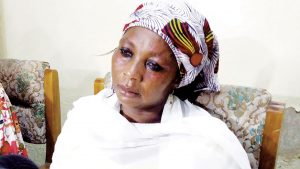 Madam Rebecca Sharibu[/caption] ôLeah is just 15 years old. The beauty of a promise is in its fulfilment. Please save my daughter. I plead with you to help me.ö But Lai Mohammed, the minister of Information and Culture, dismissed as ôabsolute fake newsö the reports in the social media claiming that Leah Sharibu had died in captivity. At a news conference in Ilorin, Kwara State, on Sunday, February 10, the minister insisted that there was no truth in the rumoured death. He alleged that the rumour of Sharibuĺs death, making the rounds just a few days to the presidential election, was another ploy by the political opposition to tarnish the image of the Buhari administration and exploit primordial sentiments ahead of the polls. ôI think it is part of the oppositionĺs strategies to throw everything at the administration and at the President. I think every day they are realising the hopelessness of their position,ö Mohammed said. Even then, about three month ago, Mohammed had assured the families of the kidnapped Dapchi schoolgirl and two abducted aid workers that the federal government would leave no stone unturned to secure their release. The minister gave the assurance on Friday, October 14, 2018, when he led a three-member federal government delegation to Maiduguri, in Borno State, and Dapchi in Yobe State. During the visit, Mohammed disclosed that Buhari sent the delegation as a follow-up to his phone call to Leahĺs mother earlier. He said that the Buhari government will not rest until Leah Sharibu has been reunited with her family. After affirming that the president had indeed, made the promise, the mother of the adopted girl, said: ôMr. President knows the channel he used to secure the release of the other girls and he cannot tell us that he doesnĺt know how to get Leah back to us. But it seems he has left us and Leah to our fate. No one is talking to us about her issue, not even the state government.ö True talk; it seems the Buhari government has not been able to find its way out of the labyrinth of the Boko Haram web to secure the release of the poor girl who has been made to through an agonising time because of her faith. [caption id="attachment_113829" align="alignright" width="300"]

Here We Are
The Scourge of Tuberculosis
More Mouths, Less Food