By Anthony Isibor.
IT was a celebration of a life well-lived as the family, friends, and well-wishers of late Hyacinth John Chukwunwike Chukwube, father of Ody Chukwube, former chief press secretary to Governor Chinwoke Mbadinuju of Anambra State, bade him farewell to eternal glory on Monday, April 12.
He died at age 94 and was buried in his compound at Umuochachom, Umuezeawala, Ihiala, in Anambra state after the Requiem Mass at  Christ the King Catholic Church, 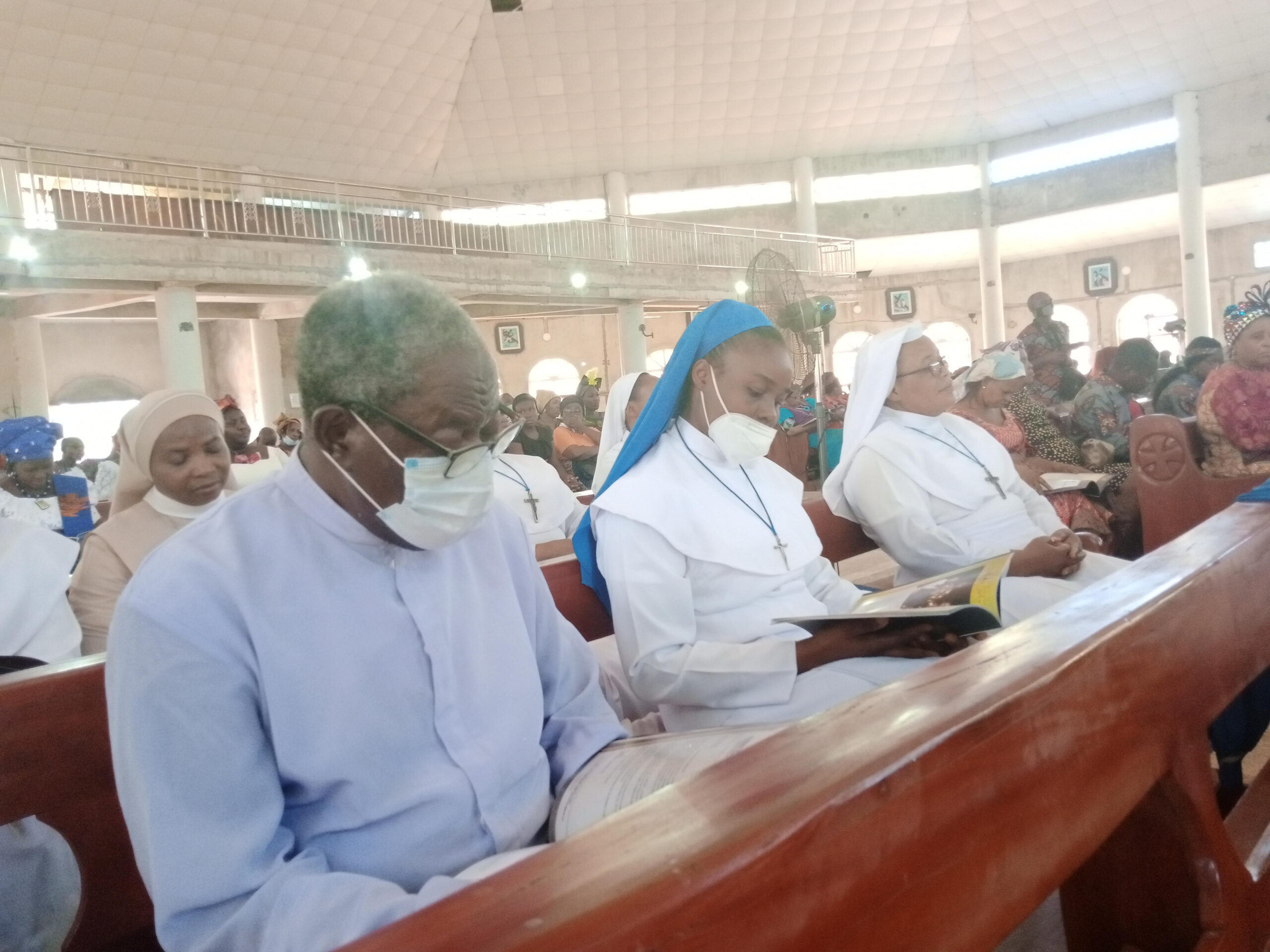 Hyacinth's death had generated a lot of reactions as can be seen in the many condolence messages in the brochure of the event, including that from the office of the Anambra State Government, the Ihiala Local government Council, traditional rulers, progressive and development unions, the Nigerian Union of Journalist, NUJ, among others.
Born on April 04, 1926, to the duo of John Daniel Igboamaeze Chukwube and Rebecca Chukwube of Umuemecheta, Umuohachom, Umuezeawala, Ihalia, late Chukwube was brought up by Christopher Azike; a teacher from Achina. Azike, who is described as an itinerant teacher, showered him with immense love and care, and this, with Hyacinth’s father’s approval, allowed Azike to take him along each time he traveled on duty, first to St Alphonsus, Agbaje Isu, in 1941, St Michael’s School Ozubulu in 1942, and St Patrick’s, Awomama for his primary education. It is said that his stay under Azike helped him to nurture his culinary expertise at a very tender age. His interest in sport, academics, oratory, and spiritualism was developed under the guidance of his master. However, his excellent performance in his standard six examinations opened up a vista in his remarkable life as an educationist per excellence. According to his biography by Ody, his first son, the career of Hyacinth also known as Ichie Ugwumba Ihiala, his traditional title, began in 1945 in Ejemekwuru, near Owerri. [caption id="attachment_292414" align="alignleft" width="294"]

Choristers at the Funeral Mass[/caption] “Armed with a standard six certificate, he was employed by the colonial government as a pupil-teacher at St Peter’s Catholic School, Ejemekwuru, where he was also both a chorister and a craftsman.  He was, however, transferred five years later to St Williams Nkwere, near Onitsha. “in 1951, he gained admission into the St Charles Teacher College, Onitsha, where he grew both in learning and in character. Late Hyacinth was a lover of sports, especially in short distances races, long jump, boxing, and football.
In 1952, he represented Onitsha Province which comprised of the present-day Anambra state in a competition organized by the Amateur Athletic Association, AAA, in Enugu, and won the first position in Eastern Nigeria. The ripples caused by that feat are said to have resonated in Onitsha and Ihalia for years.
According to his biography, late Hyacinth was a strict disciplinarian who knew how to be firm and caring at the same time, resulting in his quick acceleration to the position of a headmaster.
His first experience as a trained teacher was in 1956 at St Paul’s Umuezeawala, Ihalia, his own community. He was strict, firm, but caring in ensuring that high moral and academic standards were enforced. His strokes of the cane for recalcitrant pupils remain legendary. The result was tremendous academic and sporting records as well as high moral standards which remained unassailable to this day
“In 1961, he was made a floating headmaster in charge of EZIANI Umunamehi, Umudimogo Primary Schools, all in Ihalia, and to Immaculate Heart, Okohia as the headmaster with the schools at Umuabalike still under his jurisdiction in 1963,” he said. In want of improvement in his academic qualifications, late Chukwube was said to have applied for admission into the School of Agriculture, Umudike, Umuahia, where he obtained a grade one Teachers Certificate. He returned to the teaching profession as a headmaster briefly, until he was promoted as a senior supervisor of Primary Schools in Ihalia Local Government Area in 1977. And in 1983 he “Went to the University of Benin in pursuit of academic upliftment. Ironically, it was on the last day of his final papers that late Hyacinth received his letter of retirement. According to Ody, “The excitement and lesson learned from that experience have remained a guiding principle for us his children."
He described his late father as a very religious man who loved God immeasurably, adding: “Papa had a unique relationship with God. His commitment and respect for the Catholic doctrines were also second to none. He was uncompromising and firm in his love for God and humanity.
“This is easily traceable to his early childhood, especially the influence of his Catechist father, and his benefactor Azike. Papa was a choirmaster in many churches, a devotee of Mary, the mother of Jesus and never intentionally missed mass throughout his adult life. “Most significantly, papa was deeply involved in evangelism; assisting Fr. D. O’keefe, an Irish missionary famous for his fiery teachings. As he was the only one who could interpret the preachment of the Irish priest. Aside from these, papa was the pioneer president of Ihalia Catholic Youths Social Club, pioneer zonal president of Catholic Men Organization, one of the leading lights in the creation of Christ the King Parish Umuezeawala, Ihalia. He was also a prominent member of the Order of the Knights of St Mulumba, which he joined in 1993 and rose to the enviable heights of the 4TH degree Knight,” he said. [caption id="attachment_292424" align="alignright" width="459"]

Some Knights of St Mulumba[/caption] Ody, who said if not for poor sight, his father would have reached his target of 100 years, however, expressed gratitude to God who allowed him the grace of old age. He also said that people believe his father lived a saintly life, prayed for him to enjoy the rewards in heaven, and promised to strive to sustain that legacy. Late Hyacinth is survived by Cecilia, his widow, six children, grandchildren, nephews, and nieces, Ody's eulogy for his father ran thus: “You left an oversized shoe, I tried it and it fitted perfectly. No vacuum, no void, no space. You prepared me. I am ready. I will keep watch here; I know your eyes are on us. Sleep well nwa John, sleep well nwa Rebecca” In her tribute, Cecilia  Chukwube, his widow, said: “Mine, so this is the end of it all. Thank you for the happy companionship” Maureen, the first daughters of Late Hyacinth, on her own part said: “You are the best dad in the world, rest in peace, Nna  Akunwafo” Lilian Odigbo, another daughter, noted: “Even in your last moment, you remained yourself, ever warm, lively, and loving. You were very prayerful and kind. We love you but God loves you more, may God grant your spirit eternal repose” On his part, Ethelbert Chukwube, who wrote a long tribute, stated: “An ideal father perfectly describes you, your relationship with our mum; your spouse of sixty years is the envy of all. We will continue to cherish your beautiful memories all the days of our lives. I promise you today dad, that we will follow your guide and footsteps in all that we do."
In her own tribute, Juliet Udeze, another daughter said: “Daddy, my heart bleeds each time I remember that you are gone, but your loving and caring fatherly role will continue to linger in my humble heart."
On his part, Chijioke Chikwube, his last son, said that every one that came across his father testified of his goodness, "not only in Umuezeawara and Ihiala, but right across the whole country, Umuezeawara and Ihiala will no doubt miss your uprightness."

Cybercrimes Act will be amended – FG