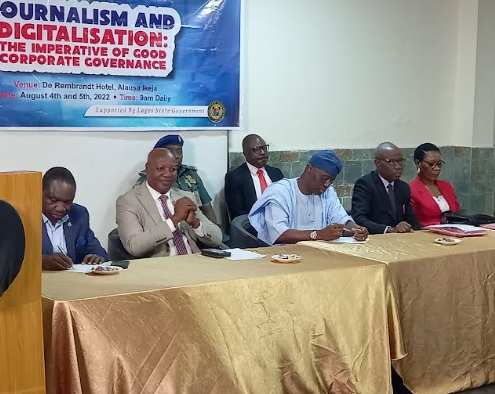 By Anthony Isibor and Christabel Ejenike.

THE two-day workshop, organized by the Nigeria Guild of Editors, NGE in collaboration with the Lagos state government opened on Thursday, August 4, 2022 in Lagos with the theme “Journalism and digitalization: The imperative of good corporate governance”.

Speaking at the workshop, Isa Mustapha, NGE President, noted that the theme of the workshop, which focuses on the importance of journalism and its survival in Nigeria, is made even more relevant as no one can deny that digitalization has disrupted the way things were previously done.

He stated that the primary purpose of journalism, which is news and features can now be disseminated through digital media and technology, which have democratized the flow of information that was previously controlled by the traditional media.

Mustapha observed that it has become obvious for the traditional media to adapt to the new way of doing things.

According to him, many practitioners in the professional media have responded to this new reality by creating their own online departments to remain competitive.

“They have taken the advantage of the audio, video, to remain on top of the new consumers list through hard air devices such as smart phones and tablets,” he said.

He urged the practitioners to fully take advantage of media convergence by combining both the print, call lines, radio and television.

“Technology has given rise to digital journalism or what you call the oral media, which is a contemporary form of journalism where the editorial content is distributed through the internet as opposed to publishing via print or broadcast.

“With digital journalism, readers can now comment on articles instantly and it even provides for breaking news,” he said.

While commenting to the development, Lanre Idowu, chief executive officer, Diamond Publications Limited, stated that the essence of journalism as an act of content development and distribution remains the same, while the platforms through which the contents are developed and shared have continued to change with the advancement in technology and the means of reportage.

According to him, the changes have continued from the analogue mode of presenting media content, packaged, processed by appointed gate keepers.

Idowu, who is also the chairman of the event, expressed satisfaction with the importance and timeliness of the theme of the workshop, and expressed confidence in the ability of the experts and discussants to arrive at a logical and all inclusive conclusion on the nature of the internet and recommends that the operators cannot run away from reasonable control.

“The earlier we agree on that, the better the health of the industry,” he said.

Idowu explained that the digitalization of the media speaks to the new playground for an old business as journalism is still about storytelling and about fact checking.

According to him, there is need for continuous investment in investigative skills of journalists and it requires more grounding in the ethical demands of the business.

He added that the digitalization of journalism addresses the opportunities that digital platforms provide.

“To begin with, the internet as the information super highway provides a revolutionary speed of developing and disseminating information to larger cases through access to interconnectivity and use of multimedia.

“All these opened up new directions of audience engagement and patronage. The cheaper production cost has opened up new usage, which is well utilized by the social platforms.

Idowu also raised some pertinent and legitimate questions which he believes will be answered at the end of the two-day workshop. Some of the questions include:

How do we use the digital environment to improve the quality of journalism?

How do we use it to promote good corporate governance?

Can we retain analogue managers in a digital environment?

What can we learn from citizen journalists, bloggers, to improve the reach of our individual platforms and now do we widen the appeal of our content among others.

“I do not pretend to have all the answers, but I reckon that some of those question will be raised and addressed more robustly by the presenters that we have lined up to speak to us in the next two days.

“We look forward to engaging them in the thoughts that they will be sharing with us. But I have no doubt that there will be need for better and relevant training, there will be more audience research and more astute business management.

“I join you in looking forward to a rewarding experience at this workshop,” he added.

In her remarks, Maureen Chigbo, President, Guild of Corporate Online Publishers, GOCOP, stated that the workshop is coming at a time that the democratization of the media space due to technology has created citizen journalism that threatens professionalism that journalism is known for.

Chigbo, who was impressed with the caliber of journalism experts present at the workshop, noted that she has no doubt that at the end of the deliberation, there will be a developed moral compass to guide the board, the shareholders, as well as media managers themselves to be able to pilot the affairs of the industry to greater heights.