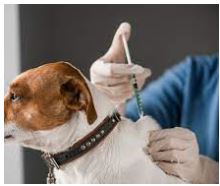 THE Federal Government on Wednesday restated its commitment to ensure eradication of dog-mediated human rabies by 2030.

The Minister of State for Agriculture and Rural Development, Mustapha Baba-Shehuri stated this at the inauguration of the nationwide free anti rabies vaccination exercise in Dukku Local Government Area of Gombe State.

The exercise tagged: “Nationwide Free Vaccination against Dog-mediated Human Rabies,” is part of activities to mark the 2022 World Rabies Day.

The theme of this year’s commemoration is “One Health, Zero Death”.

Rabies is a fatal but preventable viral disease. It can spread to people and pets if they are bitten or scratched by a rabid animal.

It is mostly found in wild animals like bats, raccoons, skunks, and foxes.

In Nigeria and many other countries dogs still carry rabies, and most rabies deaths in people around the world are caused by dog bites.

The minister said rabies was endemic in Nigeria and many other African countries, adding that the disease killed many people annually, especially in rural settlements.

“Rabies remains a global threat as it is responsible for the death of approximately 59,000 people in the world annually,” he said.

According to him, the Federal Government is working with critical stakeholders to eliminate the disease by 2030.

In her remarks, Chief Veterinary Officer of Nigeria, Dr Maimuna Habib said the choice of Gombe for the launch of the vaccination exercise was due to increase in reported cases of rabies in dogs and humans in the state.

She said the exercise was also to create awareness on the dangers and the impact of the disease on public health as well as prevention and control measures.

The chief veterinary officer said the Federal Government had developed a National Strategic Plan for the control of rabies in the country.

According to Habib, the document will guide the implementation of the National Programme for the Control of Rabies approved by the National Council on Agriculture and Rural Development.

Gov. Inuwa Yahaya of Gombe State,  appreciated the Federal Government and other partners for renewed commitment towards ensuring total elimination of the disease.

Represented by his deputy, Manassah Jatau, Yahaya said, “rabies threatens the existence of wildlife species, cause deaths of human beings and it is a great burden in animal species.

“We are challenged to do all we can to stop its transmission to humans, other animals and even to the dogs”.

The News Agency of Nigeria (NAN) reports that the event was organised by the Federal Ministry of Agriculture  and Rural Development, and state ministries of agriculture in collaboration with the United States Agency for International Development (USAID) Breakthrough Action Nigeria. (NAN)