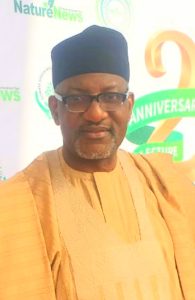 PUBLISHER and Editor-in-Chief of NatureNews, environment newspaper, Aliu Akoshile, has advocated for a biennial, as against the annual, Conference of Parties of the UN Framework Convention on Climate Change.

Akoshile made the call on Thursday at a public lecture to mark the second anniversary of NatureNews and presentation of the Hero of Environment Actions for Development
(HEAD) awards in Abuja.

The Editor-in-Chief said the COP of the UNFCCC has been held annually since 1995 and that despite the nearly three decades of the global climate summit, far-reaching decisions were not only few but their implementations had left much to be desired.

He noted that climate activists and sundry stakeholders are beginning “to question the rationale for the annual ritual of climate summit that has become a mere talk-shop”.

Akoshile said it was therefore imperative that the United Nations took a critical review of the frequency of the global climate summit.

“The COP should be held biennially, instead of annually as it has been held since the first summit in Berlin, Germany, in 1995,” he said.

Akoshile, who spoke at the gathering attended by Nigeria’s Minister of Environment, Mr Mohammed Abdullahi, highlighted the benefits of holding the climate summit biennially.

“If adopted, the biennial COP of UNFCCC will afford countries and regional blocs the ample time to digest resolutions of a previous summit, develop action plans and implementation strategies, and present a harmonized shopping list at the next meeting to reduce frictions and save the precious time often spent on negotiation,” he said.

The publisher asserted that, NatureNews is African’s first, and perhaps only, newspaper that is devoted entirely to reporting issues of the environment and climate change on the continent.

He reiterated that NatureNews is not unmindful of its historic role in the global campaign to reduce green house gas emissions and atmospheric warming below the 1.5 cu threshold.

“We are as resolute today as we were two years ago when development journalism witnessed a defining moment with the birth of NatureNews,” Akoshile said.

He said the newspaper’s mission is constant, and it is to report independently and factually on the environment and also help to amplify creative solutions for sustainable living.

Akoshile explained that CAMIC is a think-tank that is actively involved in environmental justice advocacy, climate research, public awareness, and capacity building for journalists covering critical issues pertaining to climate change and sustainable environment in Africa.

He said the NatureNews HEAD award is based on a solid foundation of integrity and credibility, adding that winners for year 2022 were selected by an independent committee of scholars and professionals, headed by Professor Abiodun Adeniyi of Baze University, Abuja.

Akoshile expressed the hope that the recognition would inspire the winners and others to show more commitments to issues of the environment.

He said that to reverse the impacts of climate change globally, the UN must constantly engage stakeholders in critical thinking that would lead humanity to creative solutions on climate mitigation and adaptation.

“It will be interesting to know how climate financing could help to reduce carbon emissions and positively transform lifestyle in the rural areas ” he said.

The News Agency of Nigeria (NAN) reports that other dignitaries at the occasion included the Conservator General of National Park Service, Dr Ibrahim Goni and a representative of the Emir of Dutse, Alh. Nuhu Sanusi.(NAN)