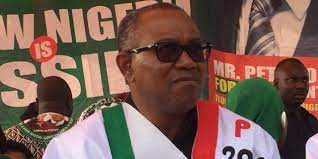 MANY Nigerians have condemned the attack on Peter Obi, Presidential candidate of the Labour Party, LP, after his successful campaign at the Muhammad Dikko Stadium in Katsina state on Monday.

Prominent Nigerians, civil society organisations and individuals expressed their condemnation of the attack which took place shortly after the campaign team of the Labour Party had successfully conducted their presidential rally in the state.

Diran Onifade, Head of Media of the PCC of the Labour Party, said that hoodlums attacked the car of Peter Obi, while he was on his way to the airport.

According to him, the hoodlums with heavy stones attacked from his driver’s side and caused substantial damage to his vehicle.

Onifade, who condemned the attack said: “The attacks may have been premeditated at the behest of desperate politicians, who had been deluding themselves with the false claim that they had the North-West locked up, but are now shocked by the show of force of the Obidient movement in the region.”

Also, Jenkins Udu, director of Public Affairs of Neo Africana Centre, in a statement made available to Realnews on Wednesday and entitled: “Mr President Must Arrest This Slide” called on President Muhammadu Buhari to take more than a cursory interest in the ugly incident, adding that it received the news of the indecorous attack with rude shock.

In the same vein, many civil society groups also vented their condemnation on the attack.

The Human Rights Writers Association of Nigeria, HURIWA, faulted the attack on Obi, Atiku Abubakar, Presidential candidate of the Peoples Democratic Party, PDP, and Abdul-Azeez Adediran(Jandor)  the PDP governorship candidate in Lagos state, describing it as a show that generally, policing has collapsed spectacularly.

The group therefore called on the Independent National Electoral Commission in partnership with the media owners in Nigeria to take up life insurance policies for the journalists penciled down for 2023 election coverage.

In addition, the Movement for Election of Nigeria President of Igbo Extraction, in a statement issued by Vincent Ezekwueme, Convener/National President and Prof. Justus Chidi National Secretary urged that it is better to make friends and not enemies while thinking the best and not the worst of others.

Describing the action, the group noted that it is barbaric, insensate, despicable and horrendous.

The group therefore called on the Katsina State government, Police high command and other security personnel to order for discreet and in depth investigation to unravel circumstances surrounding the attack in order to forestall future occurrence. We equally appeal to the government to beef up security around all the presidential and governorship candidates in view of current security challenges bedeviling the country.

Furthermore, The Neo Africana Centre, a policy think tank group, in the statement also condemned the attack noting that the campaign which has always been peaceful has become berserk.

“We are perturbed that the presidential campaigns that have largely been hitch-free have suddenly turned berserk,” the group said.

The group added that “this ugly trend must be nipped in the bud”.

It further expressed dissatisfaction with Aminu Bello Masari, the Governor of the state, noting that he had not condemned the attack.

“But then, we note with regret that Governor Aminu Bello Masari under whose watch this breach took place seems not to have batted an eyelid. Masari has not expressed regret or disappointment over the ugly incident. His silence leaves much to be desired. Public office holders must understand that they hold public office in trust,” the group said.

The Neo Africana Centre therefore called on President Buhari to ensure that Nigerians of whatever persuasion are protected under the law.

Recall that the Labour Party presidential campaign team took their rally to Katsina state where the party’s presidential candidate met and spoke with women in a town hall meeting and then to the Muhammad Dikko Stadium where he had a rally and promised to tackle hunger, insecurity and unemployment among others.