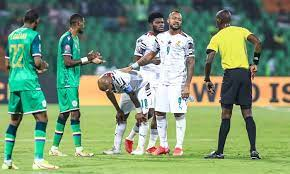 NIGERIA’S Mixed Martial Arts Fighter and 2015 African Games Gold Medalist, Emmanuel Nworie ‘The Marchine’ will on Saturday battle Ghanaian Daniel Apah ‘The Road Map’ in the Battle of the Gladiators in Lagos.

The News Agency of Nigeria (NAN) reports that the fight comes up at the Muson Centre Onikan, Lagos, amongst many other crunchier battles set to ignite the hall come Jan. 28.

Similarly, as the Working Machine slugs it out in the Welterweight class with ‘The Road Map’ Ebenezer,  ‘Iron Fist’ Vincent and Geoffrey John ‘The Skullcobra’ have got some old scores to settle.

Their fight is in the lightweight category where Vincent takes down Geoffrey in the semi final of last month’s Spirit of the Warrior Akalaka 2 Streetfight in Lagos.

However, Skullcobra disagreed with the judges’ decision on the day and promised to make it easier for the arbiters on Jan. 28.

Completing the main fight-card is an all action featherweight bout between Uchejim Onyeka of the Nigerian Army and Ghana’s Edmond Akhator.

The Ghanaian could be on a revenge mission to Nigeria after losing to a reverse spinning elbow by Jackiel Ayana last year in Rivers State.

The prelims are also stacked with some tasty duels to entertain fight audiences.

Stepping into the full glare of international stage fights for the first time in his MMA career is fast rising talent Ebere Stanford ‘The Shaolin Tiger’ who takes on Ghana’s Jerry Otoo.

The enterprising Stanford has been a beneficiary of the Spirit of the Warrior Educational foundation to tertiary institution levels.

Ebere enjoyed this educational privileges after convincing in previous amateur and professional MMA tournaments hosted by the promotions.

Meanwhile, in the spirit of grooming local talents from the grassroots, two amateur bouts have been primed into the championship sanctioned by NMMAF.

The Gladiators Cage Fight in Lagos is a prelude to one of the biggest MMA fight nights in Nigeria “The Night of Glamour and Glory” coming up on April 29 in Abuja.

It is also headlined by the former American MMA champion D’juan ‘Dirty South’ Owens against a North African opponent.(NAN)