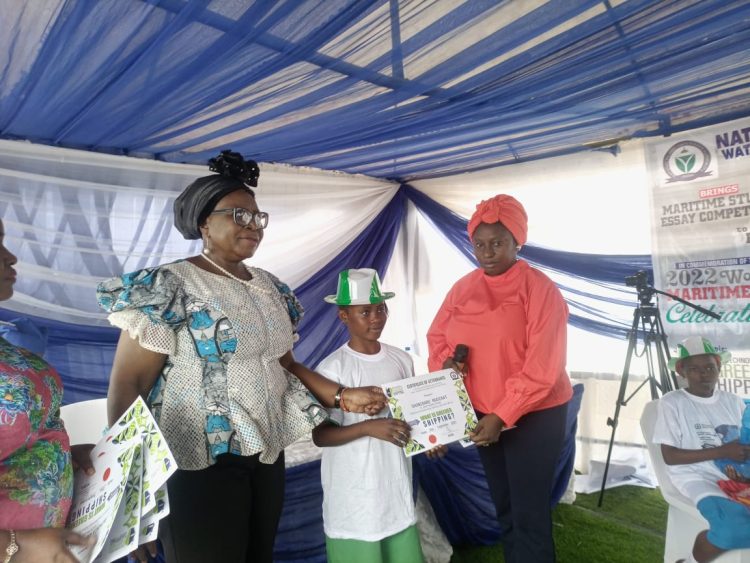 THE National Inland Waterways Authority (NIWA) in collaboration with Ocean Ambassadors Foundation (OAF) sensitised some Lagos Island primary school pupils on career in the maritime industry on Wednesday in Lagos.

The programme, a maritime quiz for primary 5 and 6 pupils, with the theme: “New Technologies for Greener Shipping,” was also to commemorate the 2022 World Maritime Day celebration scheduled for Sept. 29.

Mrs Sarat Braimah, Area Manager, NIWA, noted that the quiz was a means of catching them young for the maritime industry and to impart knowledge that would yield the needed change.

“This is part of the event to commemorate the 2022 World Maritime Day celebration. NIWA is in charge of primary schools, the Nigerian Ports Authority is for secondary schools and the Nigerian Maritime Administration and Safety Agency is for tertiary institutions.

“On the theme, we are encouraging the young children to know and write about the new technologies for shipping and they have written a lot of essays and the most brilliant ones will emerge.

“NIWA wants people to know and key into the theme of this year’s world maritime day because the new technologies will bring about greener shipping,” she said.

According to her, greener shipping is about doing things that are safer, like new engines, technology, ways of operation to have an eco friendly environment and secured inland waterways.

The NIWA boss said the winner of the competition would be presented on the world maritime day and given a special gift by the Internation Maritime Organisation (IMO).

On the the topic, new technologies, she said it had to do with addressing climate change, means of operation, ships and boat emission, locomotive ways, adding that with new technology, these would be reduced.

“This is a new thing and everyone will have to key into it for a greener waterways, and the children should know about it at early ages,” she said.

Also, Mrs Violet Williams, convener OAF, noted that the catching them young initiative would enable the children at early age know about greener shipping and the technology involved.

“Presently with the catch them young programme that I do, I have two girls studying marine engineering and two boys studying nautical sciences in Ghana, also today’s examiner is studying engineering at University of Lagos.

“Yes, it’s not easy but the resilience and the passion of the children are driving me, because they want to learn more.

“That is why we decided to continue with the OAF nationwide maritime quiz, especially for the girl child,” she said.

She pointed out that maritime was male dominated, so NIWA intentionally encouraged the girl child to come onboard, dedicating 80 per cent to girls and 20 per cent to boys.

Williams said for the selection process, 20 schools were invited, ten public and ten private schools on Lagos Island for proximity and they brought their 250 wards.

“They were streamlined by the examiners and ten schools qualified for the semi-final, and in a short while we will have the winners who will be compensated by NIWA,” she said.

Williams said NIWA had challenged other parastatals on the need for a succession plan, as getting the young ones early would ensure that when one echelon of the maritime system disengaged, the gap would be filled.

Mr Abiodun Oladunjoye, Director of Education/Principal, Eko Akete Senior Grammar School, commended NIWA and OAF for tapping children from the grassroots, and arousing their interest in the maritime world.

He said this would expose them to various options of career outside the conventional line, and other professions in the maritime industry.

“Most of them have not seen the potential and prospect of Lagos Island even though most of them are born there.

“With this programme, they have been exposed to dreaming of a career of being a maritime lawyer, doctor in the industry.

“I see the zeal in them and we should put our hands together to see that it continues,” he said.

The News Agency of Nigeria reports that the event witnessed the unveiling of a maritime career chart that was presented to each school that participated. (NAN)