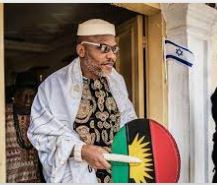 NNAMDI Kanu, detained Leader of the Indigenous People of Biafran, is fast becoming a prisoner of conscience. In July the United Nations humanrights body directed the Nigerian government to release him. On August 10, a religious group based in Umuahia, Abia State, conferred on Kanu  the “Battle Axe of God” award.

Presenting the award to him, Rev. Evang. Amarachi Joseph, president, ‘Women of Favour 2022’, Gracious International Ministry Church, Umuahia, said the women decided to honour Kanu because “he is a fighter and believer in peace, justice and liberation of humanity”.

The Women Leader, who said that Kanu did not commit any crime to warrant his persecution, pleaded with  President Muhammad Buhari to release him without further delay.

She argued that his immediate and unconditional release just as the United Nations Human Rights Council had requested, would help dounse tension in the South East.

According to her, ” Kanu is a faithful child of God; he  does not discriminate. We plead with Mr President to please tamper justice with mercy.

“May God  touch your heart to yield to the prayers of the church and release Nnamdi Kanu. The women leader further pleased with the President to find solution to the festering insecurity in the South East. We need security in our zone so that we can plant and harvest their crops. He should also try to find ways to stop the use of hard drugs by youths caused by children staying at home due to prolonged ASUU strike”, she said.

They further pleaded with President Buhari to look at the demands of ASUU “to ensure that our students get back to school soon”.

Earlier in a sermon, the Guest Preacher, Rev. Esther Jacobs advised the women to be faithful to God and be submissive to their husbands.

In a remark, founder of the church, Apostle Ikechukwu Joseph, harped on peace and unity of the nation, and tasked the Federal Government to contain the senseless  killings in the country.

Receiving the award on behalf of the IPOB Leader, Kanu’s younger brother, Prince Emmanuel, thanked the women for recognizing the contributions of his brother.

Kanu’s brother who broke down in tears over his brother’s ordeals, promised to convey the message to him.

He expressed optimism that his brother would be freed, said that even the UN had acknowledged that he is innocent.

With reports from Vanguard