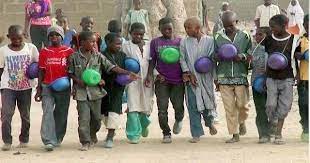 THE National Orientation Agency in collaboration with the UNICEF has inaugurated a media and community dialogue to reform the almajiri system and prevent family separation in Kaduna State communities.

The community dialogue was inaugurated in Zaria, at the Palace of the Emir of Zazzau, Amb. Ahmed Bamalli, as part of efforts to enlist his support and partnership of the Zazzau Emirate Council.

The News Agency of Nigeria (NAN) reports that almajiri refers to children of non-formal Qur’anic school who migrate from their homes in search of Islamic knowledge.

The term has been expanded over the years to refer to any young person who begs on the streets and does not attend formal school.

The State Director, NOA, Alhaji Galadima Zubairu at the inauguration on Wednesday, stressed the importance of the traditional and religious institutions in transforming the almajiri system in the state.

Zubairu noted the good intention of the system, adding however, that currently, the system allows violation of children through street begging and neglect by parents and traditional Islamic school teachers.

He said that the four-day community dialogue would take place in 36 selected communities of Zaria, Soba, Kubau, Ikara, Makarfi and Igabi Local Government Areas with the highest number of documented almajiri children.

He explained that the massive media and community dialogue was designed to engage critical stakeholders on the menace of street begging, child labor and neglect.

The state director solicited the blessings of the Emir in mobilising local support, which he said was critical for the success of the dialogue in line with NOA’s mandate of re-orientation and promotion of positive values.

According to him, at least 3,600 community members, including religious leaders would be sensitised with positive parental norms, child protection and support to almajiri children for their integration into a formal education system.

“At the end, we will develop action plans and obtain a statement of commitment from the community and religious leaders on reforming the almajiri system and increasing the enrolment of children in schools.

UNICEF Child Protection Specialist, Dr Wilfred Mamah commended the Emir for his remarkable contribution to development in the state.

Drawing from historical, cultural, and religious norms, Mamah argued that children have always been treasured across all cultures in Nigeria.

According to him, protecting children from violence, abuse and neglect was already deeply embedded in culture, religion, and norms before the emergence of the UN Convention and the Child Rights Act in Nigeria.

“The continued prevalence of abuse and neglect of children as exemplified in the almajiri system, although unjustifiable both in culture, religion, and laws, continues to present a major barrier to development in the state.

“So far, a total of 209,950 children comprising 105,726 almajiri children and 104,224 out-of-school adolescent girls have been captured in the Child Protection Information Management (CPIMS) tool.

“UNICEF and the Kaduna State government have played critical roles in re-uniting 10,800 almajiri children but the problem persists.

“However, where the children have been reunited with their families, the communities are not ready to reintegrate the children while many are being stigmatised, traumatised and may grow to be violent.”

He pointed out that the children were not equipped to function in a family environment and had to fight for themselves, adding that the families may be poor and not necessarily want the children back.

He said that the situation raises the need to address family strengthening, community reintegration and development of children to ensure that they were not being sent back to the street.

He appealed for the support the Emir and his Emirate Council to support the reform with a view to end all forms of violence and discrimination against almajiri children in the state.

Hajiya Hafsat Baba, Commissioner for Human Services and Social Development and the Chairman, Justice for Children Forum in the state, Justice Darius Khobo, equally stressed the need for a reform in the almajiri system.

Baba, who was represented by the Director, Youth Development, said that the move would help address the current development challenges affecting the state, which may escalate if the almajiri issue was not addressed.

In his remarks, the Emir thanked NOA, UNICEF, and Kaduna State Government for the initiative, which he described as “very important” and pledged his full support.

The royal father pointed out that engaging local community members would help sift the good aspects of the system for the building of a better system that protects the interest of all children.

“This will also ensure that the children are not robbed of their unique identities and a chance to grow to full potential and contribute to the development of their communities,” he said. (NAN)