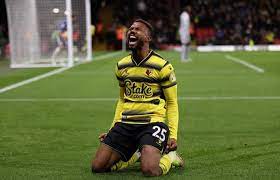 FEW teams have been as busy as Nottingham Forest in this transfer window. Steve Cooper’s side have gone about splashing the cash and it appears their spending is far from over. Next on the list is Watford striker Emmanuel Dennis, reports lastwordonsport.com.

The Nigeria international impressed last season in the Premier League and according to Adam Leventhal of The Athletic, Forest have made an opening bid.

The Reds certainly aren’t resting on their laurels when it comes to the transfer window. All over the field, there have been new additions, with Dennis looking like he could be the next man up.

Dean Henderson is the new man in between the sticks having been loaned in from Manchester United. Brice Samba joined Lens in France, while several key players from last season’s promotion campaign were loanees, including James Garner, Djed Spence and Keinan Davis.

In Forest’s season opener, they struggled at St James’ Park. Fabian Schar and Callum Wilson netted a pair of impressive goals, while the visitors were unable to put a single shot on target. This comes after having invested heavily in the squad.

Super Eagles’ Taiwo Awoniyi was the big money arrival in the attacking third, but he only came off the bench, as Sam Surridge partnered Brennan Johnson up top.

This is where the 24-year-old Watford striker enters the fold. Beyond his fellow countryman, Awoniyi, the position is rather weak.

Surridge and Lyle Taylor are perfectly fine players in the Championship, but this step-up may be too much. Dennis on the other hand proved that he could compete in the Premier League, following 10 goals in 33 appearances in the League for the Hornets last season.

The question remains how strong Forest’s interest is in Dennis, their original bid being around £20 million.