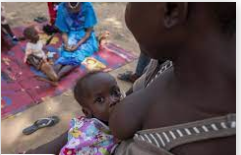 A Nutritionist, Dr Olugbenga Bankole, has advised working mothers to express their breasts milk through breast pumps to breast feed their babies.

Bankole, who is the Programme Manager, Nutrition Department, Kwara State Primary Healthcare Development Agency, gave the advice on Thursday in Ilorin while speaking with journalists on the sidelines of the commemoration of World Breastfeeding Month 2022.

The breastfeeding month, slated yearly in August, is dedicated to advancing advocacy, protection and promotion of breastfeeding to ensure that all families have the opportunity to breastfeed.

The theme for the 2022 week, “Step Up for Breastfeeding: Educate and Support”, is meant to encourage organisations and nations to create safeguards for breastfeeding.

Bankole, who also advised that mothers should breastfeed their children for six months after birth, said that antibodies in breast milk aide the infant’s defense against germs and viruses.

He said that working mothers had no excuse not to breastfeed their babies because expressed milk (squeezing milk from a nursing mother’s breasts) could last up to four days without deteriorating.

“Milk that has been expressed can last for four days in the refrigerator and last six months while in the freezer,” he said.

According to him, the advent of COVID-19 in 2020 saw a significant rise of about 70 per cent of women in Kwara that were breastfeeding their babies.

He, however, said that there was a decline to about 55 per cent in 202, adding that the State Committee on Nutrition ensured that strategic places were designated across the Ministries, Department and Agencies for working mothers to breastfeed their babies.

He said that there was need for mothers to breastfeed their babies for about eight times daily and for every three hours because it was important that babies were breastfed frequently rather than only on demand.

He explained that the Code was developed as a global public health strategy and recommended restrictions on the marketing of breast milk substitutes, such as infant formula, to encourage to breastfeed and that substitutes were used safely, if needed.

He said that the Code also covered ethical considerations and regulations for the marketing of feeding bottles and teats, adding that breast milk substitute could be used only in special circumstances such as for orphans.

He said that services of Wet-nurses (a woman employed to suckle another woman’s child) could be utilised if possible “even though the practice is subject to the socio-cultural tradition of a place”.

Bankole added that the issue of breastfeeding was multi-faceted requiring the support of the father, Obstetricians, Gynaecologists, midwives and even the community at large.

He said:  “Warm Chain campaign” places the mother-baby, father and other stakeholders as part of the chain to effective breastfeeding.

“It strives to link different actors across the health, community and workplace sectors to provide a continuum of care during the first six months of the baby life,” he said. (NAN)