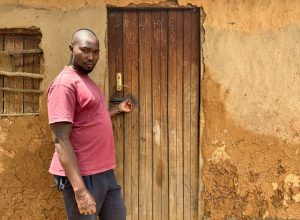 Philip Wangoi, a survivor of the post-election violence, stands outside his house after casting his ballot during the general elections by the Independent Electoral and Boundaries Commission (IEBC) in Kiambaa, on the outskirts of Eldoret, Kenya Aug. 9, 2022. REUTERS/Ayenat Mersie.

ONE inked fingernail and old burn scars: the story of Kenya’s past election traumas and current hopes is written on the skin of Philip Wangoi’s hands.

At 16, he was badly burned in a church set aflame during the post-election violence that rocked Kenya after the disputed 2007 elections. More than 1,200 people were killed.

Today, he cast his ballot peacefully in a poll still haunted by the ghosts of previous elections. Like millions of citizens, he prays politicians take disputes to the Supreme Court, instead of the streets.

“I’m scared. Whenever it nears the election period, I get scared,” said Wangoi, clasping his scarred hands as his two young children played next to a puppy.

President Uhuru Kenyatta must step down due to term limits.

The two frontrunners to succeed him are veteran opposition leader Raila Odinga and the current Deputy President, William Ruto. Kenyatta fell out with Ruto and has endorsed Odinga.

All three men were involved in the 2007 election, but back then Ruto backed Odinga against Kenyatta’s then-boss. Kenyatta and Ruto faced charges at the International Criminal Court over their alleged role in the violence; the cases were later dropped.

Many citizens are too discouraged to vote, saying they are being crushed by soaring food prices and corruption. Others, like Wangoi, are bitter that wealthy leaders find it so easy to forget the past for their own expediency.

“These politicians need these positions for their own personal benefits and interests … they don’t do anything for regular people,” said Wangoi from outside his home in Kiambaa, on the outskirts of Eldoret.

After the disputed 2007 election, Wangoi’s family were targeted because they were from the same Kikuyu ethnic group as the winner.

Fleeing angry mobs, Wangoi, his mother, and others sought refuge in a church. The building was set alight.

Wangoi dove through a window, burning his hands and legs. He stripped off his melting clothes and ran about 10 km (6 miles) to a hospital. Thirty people burned to death, including children.

Wangoi is lukewarm about politicians, but says Kenyans must find better leaders.

That’s why he’s voted every election he could.

It is up to us Kenyans to ensure a peaceful election,” he said steadily. But even if most people want peace, a small mob paid to cause chaos can derail the process, he warned.

For the sake of his family and others like them, he said, whoever loses must accept the results.

As in previous elections, corruption and the economy remain key issues.

The fallout from the mismanagement and subsequent ballooning debt of the Nairobi to Mombasa Standard Gauge Railway (SGR), financed and built by China, has been a constant feature of public debate.

In addition, the enormous fortunes accumulated by the political elite, including presidential hopefuls, have been a hot topic.

Kenya is East Africa’s main economic hub and has registered strong growth under Kenyatta’s rule but the COVID-19 pandemic, Russia’s invasion of Ukraine, and drought have pushed up prices for food and fuel. Furthermore, a third of the country’s youth is unemployed and the nation is struggling with a major debt crisis.