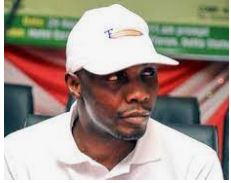 EX-militants in Ondo State have applauded the Federal Government over the award of the pipeline surveillance contract to Chief Government Ekpemupolo, also known as Tompolo.

The ex-militants under the aegis of United Sea-Wolf Avengers, made the commendation in a statement signed by their leader, “General” Deji Ehinmowo, on Wednesday in Akure.

Ehinmowo assured that Tompolo, who was the former leader of the Movement for the Emancipation of the Niger Delta, would secure the pipelines across the region for the benefit of the country.

He said that Tompolo was in the best position to execute the pipeline surveillance contract awarded by the Federal Government, having carried out similar exercise successfully in the past.

Ehinmowo noted that the Federal Government’s decision to award the contract to Tompolo was not misplaced.

Ehinmowo noted that Tompolo hated bunkering activities in the Niger Delta due to the destruction of aquatic lives and its health implications.

“It is on record that Tompolo has worked tirelessly for the peace in Niger Delta and will continue to sustain and protect the wealth of the nation in collaboration with other stakeholders.

“The United Sea-Wolf Avengers commend the Federal Government for doing the right thing by awarding the protection of a vital nation’s wealth to our leader, Tompolo.

“The contract to Tompolo is another source of empowerment to the people of the Niger Delta region.

“We are ready to support the Federal Government’s efforts to curb crude oil theft and illegal oil bunkering in the Niger Delta region and the development of the region as well as to boost the economy of the country.

“We equally want to thank the leader of ex-militants in Ondo State, Chief Bibopre Ajube aka Shoot-At-Sight, for his leadership qualities and well coordinated activities towards the development of the Niger Delta region,” Ehinmowo stated.

He also declared the support of the group for the Federal Government’s action, assuring of Tompolo’s capacity to help save the country billions of naira being lost through oil theft and pipeline vandalism.

“We, the ex-militants in Ilaje/Ese-Odo Federal Constituency, want to thank President Muhammadu Buhari and to declare our total support for his administration’s efforts at developing the Niger Delta region,” Ehinmowo said. (NAN)