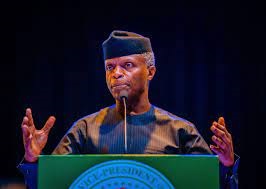 VICE President Yemi Osinbajo has urged young people to learn from history rather than repeat it or allow it to jeopardise a better future.

Osinbajo’s spokesman, Laolu Akande, in a statement on Tuesday in Abuja, said the vice president was the Special Guest of Honour at a youth forum to mark the 60th birthday of the Liberian Vice President, Dr Jewel Howard-Taylor, in Monrovia, Liberia.

The Liberian President, his deputy and different Liberian groups welcomed and decorated Osinbajo with traditional recognitions and awards.

Speaking at the youth forum themed “Conversation with the Vice President and Young People,” Howard-Taylor described her Nigerian counterpart as a humble and selfless leader who inspired hope for a better Africa.

“He is the most humble politician in Africa,” she said.

The Liberian vice president said that emerging leaders across the continent had so much to learn from his humility and commitment to service.

Osinbajo was honoured also with an award of Distinguished Service to Humanity – for his exemplary service to the development of Nigeria, Liberia, West Africa, and Africa- by Liberian youths, about 400 of whom were part of the event.

Presenting the award plaque to the vice president, the co-host of the event and youth activist, Mr Benjamin Sanvee, said the award was in appreciation of Osinbajo’s  service, everything he had done and would continue to do.

“This is in deep appreciation for years of stellar service to Nigeria, Liberia, to the ECOWAS region, the continent of Africa and the world at large.

“You are a shining example of an exceptional, selfless and exemplary leader, who is quietly and steadily, not just a source of inspiration for Africa’s youths, but you have impacted the lives of millions around the continent in so many ways.

“You are a rare and outstanding leader and we thank you for all that you do and will still continue to do.

“ I present this plaque to you, on behalf of young Africans, as one of Africa’s most outstanding leaders,” he said.

More so, Osinbajo was decorated at the event with the traditional title of “Chief Flomo Barwolor” meaning “the light to the people.”

This traditional title was presented by a Liberian Cultural group led by Amb. Julee Endee.

Responding to questions earlier during the conversation with Liberian youths, Vice President Osinbajo spoke on learning from past experiences.

“What you are supposed to do with history and your past, is to learn from it and never let it repeat itself.

“One of the most important things for young people is that you must bear in mind all the time that your history is not your destiny, it is just part of your story.

“Your destiny is what you have decided, where you are going and you will get there as long as you don’t allow the tyrant and oppressor of history to hold you back.”

He urged young people to leverage opportunities offered by emerging technologies to improve themselves educationally and economically, noting that the benefits of technological innovations are numerous.

Also, while in Monrovia, Osinbajo made a brief stop at the Ellen Johnson Sirleaf Presidential Center For Women Development, to participate in the programme for the ECOWAS Human Rights Day.

The event also coincided with the 5th anniversary of Ms Sirleaf’s post- presidency.

In his remarks at the centre, Osinbajo applauded the contributions of the former Liberian President to the development of the country both in and outside office.

“One of the things you have been able to show is not just that it is possible to serve well, but also to serve out of office and to do perhaps more.

“What you have done since you left office has had perhaps more impact, especially around Africa, and we are really proud of the work you have done and your achievements.

“We pray that there will even be greater achievements in the future,” Osinbajo said.

On her part, Sirleaf welcomed the vice president to Liberia and urged him to ensure there were more female participation in governance and politics in Africa.

Osinbajo was accompanied to the meeting with former President Sirleaf by his host and Liberian counterpart.(NAN)