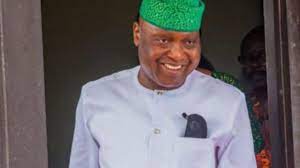 THE Ekiti State Governor, Biodun Abayomi Oyebanji, has hailed the judgment of the Supreme Court, affirming him as the validly elected candidate of the All Progressives Congress, APC, in the June 18, governorship election in the state.

The Supreme Court had on Monday dismissed the case instituted by one of the All Progressives Congress, APC, governorship aspirants, Kayode Ojo, challenging the validity of Oyebanji’s emergence as candidate of the party.

Oyebanji in a reaction to the ruling of the apex court, described it as a welcome development and a triumph of truth and justice.

In a statement by his Special Adviser on Media, Yinka Oyebode, Gov. Oyebanji, who described the ruling of the apex court as a landmark judgment, said the Supreme Court had put a final seal of validity on the primary election of the APC that produced him as the party’s candidate for the June 18 governorship election.

“Again, the judiciary has lived up to expectation as the bastion of our democracy and rule of law. The ruling has put to rest all controversies surrounding the January 27th, APC primaries,” Oyebanji said.

While lauding the judiciary for living up to its reputation as the last hope of the common man, Oyebanji said he was happy the court upheld the decision of over a hundred thousand APC members that voted for him across the 16 local governments as the party’s candidate during the primaries on January 27.

The governor, however, urged his supporters to be magnanimous in victory, stressing that the case is a family affairs, which should not warrant any name calling or bad blood among members of the party.

He also called on Kayode Ojo and a few others who might have issues with the outcome of the January 27 primaries of the party to sheath their swords and re- direct their energy towards working with his administration to deliver the dividends of democracy to the people of the state.

“I congratulate the judiciary for living up to expectation as the last hope of the common man. I also appreciate my brother, Kayode Ojo for approaching the court for the determination of the matter, instead of resorting to self -help.

“Now that the Supreme Court has ruled and affirmed my candidacy, I urge my brother, Ojo and all others who might have issues with the outcome of the January 27 primaries of our party to join hands with us in the task of building a more prosperous Ekiti State,” he added.

He also congratulated the national and state leadership of the APC for the victory. “It is victory for democracy, it is victory for our people. We thank God Almighty from whom all blessings flow. We thank the judiciary for living up to expectation. We thank the entire Ekiti kete for their demonstrated love and support.

“To all APC members, our next assignment is to work and mobilise massively for the victory of our Presidential Candidate, Bola Ahmed Tinubu and our party in the coming presidential election.” Oyebanji added.