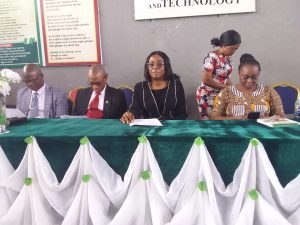 Esan made this known at a sensitisation programme, held at Oyo State College of Health Science and Technology, Eleyele, Ibadan on Thursday.

She said that more than 100 of the petitions had been concluded, with recommendations made to ministries, departments and agencies (MDAs) in the state, while four cases were filed in court by the state Attorney-General for prosecution.

Accordint to Esan, the agency does not have power to prosecute but can make recommendations to the attorney-general to prosecute anyone found culpable in corrupt practices.

She said that some government officials investigated by the agency were currently being prosecuted in various courts in the state.

Esan said that the law establishing the agency empowered it to investigate allegations of unfair administrative actions, non-performance of government contracts as well as allegations of corrupt practices against any individual, MDA and corporate body, among others.

The chairman said that members of the public and public servant had been responding, adding that the agency had achieved a lot since its inauguration in December 2020 by Gov. Seyi Makinde.

“Corruption is a big problem hindering the development of Nigeria and it affects all areas of the society negatively.

“Eradicating it will, therefore, help the development of Oyo State in particular and Nigeria in general.

“Combating corruption in the state is the responsibility of everyone. All need do is to speak out anytime we notice any corrupt practice,” she said.

Esan stated further that fighting corruption in the past was the exclusive responsibility of EFCC and ICPC at the federal level, adding, however, that they had lots of cases to attend to.

According to her, the efforts of EFCC and ICPC need to be reciprocated by other anti-graft agencies, which OYACA is currently doing.

She said that OYACA had jurisdiction to investigate any act of corrupt practices in the state and that it had branch offices in all the five geopolitical zone of the state.

She called on residents not to hesitate to report to the agency anyone suspected to be involved in any corrupt practice, no matter how highly placed, saying that the agency would do the needful.

In her remarks, Provost of the college, Mrs Oluyemi Oyewo, appreciated the agency for the sensitisation and its efforts at reducing corruption in the state.

The News Agency of Nigeria (NAN) reports that Esan was accompanied by the agency’s board members, including Prince Oyebade Oyedepo, Mrs Esther Olapade and the Executive Secretary, Mr Ibrahim Tijani, among others. (NAN)