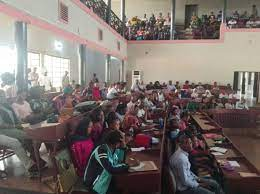 THE Oyo State Government says it has trained no fewer than 400 applicants under the Graduate Industrial Self- Employment Loan Scheme (GISES) on Entrepreneurial Development Programme (EDP).

Chief Bayo Lawal, the state Commissioner for Trade, Industry, Investment and Cooperatives, made this known, while declaring the training open on Thursday in Ibadan.

Entrepreneurial Development Programme is to create a congenial environment for youths to contribute their quotas toward revamping the economy through diversification by concentrating on non-oil sector, thereby adding value to natural products through industrialisation.

Lawal, represented by the Permanent Secretary of the Ministry, Dr ‘Bunmi Babalola, at the programme.

He said that the training was aimed at developing the capacity of the applicants in relation to required skills and knowledge with focus in the areas of feasibility study writing and small scale industry management.

According to him, this is in line with the best global practices to guide the applicants for the loan scheme and their business plans.

He said that the state government would empower qualified applicants with N500, 000 loan.

Lawal lauded the magnanimity of Gov. Seyi Makinde in his determination to reposition the state by reviewing its industrial policy to facilitate the development of entrepreneurial skill among youths, self- employment, encourage effective utilisation of the state’s natural resources.

He said that the state government was also determined to ensure general improvement through conservation of fereign exchange earnings.

Lawal lauded the governor for approving special fund to assist youths in the manufacturing and service sectors, among others.

He noted that, the Graduate Loan Scheme, which has not been in operation for many years, was undoubtedly one of the veritable tools for solving unemployment that had become endemic in the country.

“Let me tell you that this programme is not a scam. The governor insisted that we must do it because part of his programme is for our youths to be engaged by providing soft loans for them so that they can start being entrepreneurs when they still have the energy and the mindset of succeeding.

“Though, we have seen some of the applicants that say they do not need up to that.

“We have a competent technical committee comprising members from the Manufactures Association of Nigeria (MAN), Small and Medium Enterprise Development Agency of Nigeria (SMEDAN).

“Others are, Oyo State Council of Chambers of Commerce (OYCCIMA); Nigeria Association of Small Scale Industrialists (NASSI) and the Ibadan Chamber of Commerce and Agriculture to assess the feasibility reports.

“It is not a matter of over quoting or under quoting; we want people who can key into this particular scheme,” he explained.

The commissioner admonished the beneficiaries to make judicious use of the loan by investing into areas where they have comparative advantage and competency as would be reflected in their business plans.

According to him, they should not see the loan as a largesse that will go down the drains.

Earlier, the Director Industry, Mrs Mojeedat Olanrewaju, said that unemployment was one of the causes of the pervasive insecurity in the country.

She added that accessing the loan by the applicants would be determined by the quality of the feasibility study reports they submitted.

The resource persons, a Production Engineer/ Industrialist and a Chartered Accountant: Mukaila Oladipo and Mr Olufisayo Akintunde respectively, trained the applicants on project implementation and preparation of feasibility reports.

One of the applicants, Mr Albert Oyelami, on behalf of others, expressed gratitude to Makinde for the programme, hoping that the loan would be disbursed very soon.(NAN)