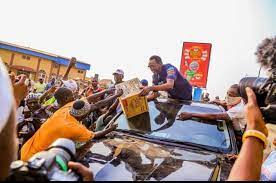 Director of Communications in the Segun Adewale Campaign Organisation, Mr Segun Ogundairo stated in Lagos on Wednesday that Adewale, former Lagos PDP Chairman gave the gifts in Ikeja on Tuesday.

Adewale, popularly known as “Aeroland’’, said the gifts were to enhance his electoral victory in the 2023 election.

He said he was touched by the sufferings of the constituents and determined to represent their interests alone if elected.

According to him, the distribution of the variety of gifts, including food and cash was to alleviate the plights of the constituents and to give them hope.

He urged the constituents to vote for him and for other PDP candidates in all elections.

Adewale urged them to get their Permanent Voter Cards before the deadline and to vote for competent leaders.

“Without your PVC, you cannot vote, and you must vote because I am sure you want a change of government.

“You want a government that will work for you, for your children, and for your family. I beg you to please collect your PVCs and vote for us,’’ he said at his campaign rally.

Adewale, who noted that government remained a serious business, and was not for the inexperienced, urged the constituents to vote for PDP to experience representation and governance.

“Government is for persons with proven track records in public and private endeavours.

“As an accomplished businessman, philanthropist, and astute politician, I have proven track records both in the public and private sectors.

“I am committed to fulfilling my pledges to constituents in Lagos West senatorial district if I am elected on Feb. 25,’’ he assured.

Adewale said he would continue to meet with critical groups and stakeholders in the 10 local government areas that make up the district to examine how to alleviate their sufferings. (NAN)