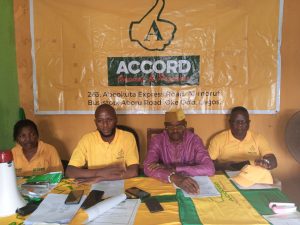 Mr Dele Oladeji, the Lagos State Acting Chairman of Accord (Second left), with other members of the state executive council at news conference on Wednesday in Lagos.

ACCORD in Lagos State has expressed hope that peace will return to the party soon as it awaits a court ruling on its legitimate executives and authentic candidates’ list for the 2023 General Elections.

The party’s Acting state Chairman, Mr Dele Oladeji, expressed the optimism at a news conference on Wednesday at the party’s secretariat in Alimosho, Lagos State.

Oladeji said that the court would on Oct. 27 resolve  the bickering and leadership crisis in the chapter.

The News Agency of Nigeria (NAN) reports that Oladeji-led executive committee and a cabinet constituted by a former Chairman of the chapter, Mr Joseph Beckley, conducted parallel primaries in May for the purpose of 2023 elections.

The Oladeji-led executive consequently asked the Federal High Court in Lagos to determine the authentic state executives of the party and the candidates’ list to be accepted by the Independent National Electoral Commission (INEC).

Oladeji noted that political crisis was not limited to the party, saying that his executive committee was working round the clock to move the party to victory in 2023 elections.

He said: “It is very shameful that we are in this situation today.

“We are a party of due process, we stand for the truth and the constitution of the party. In coming days, we will have a court ruling to make our campaign smooth.

“In few days, the truth will triumph and we shall present our credible candidates to Lagos residents.

He said that the fortune of Accord  remained bright and that the party had high chances of winning.