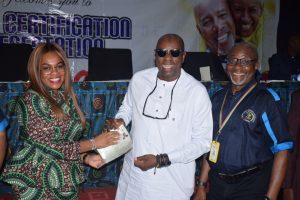 THE Lagos State Government on Friday said it would not relent in its pursuit to improve life for its retirees and had placed the welfare and wellbeing of its pensioners as top-priority .

Mrs Ajibola Ponnle, Lagos State Commissioner For Establishments, Training and Pensions made the pledge at the 96th Retirement Certificates Presentation organised by the Lagos State Pension Commission (LASPEC) in Lagos.

“The card will include benefits such as  subsidised health care and transport services for our retired public servants.

“Please ensure you are registered with LASRRA to enjoy these benefits upon commencement,” Ponnle said.

According to her, the state government has paid N1.113 billion as accrued pension rights into the Retirement Savings Accounts (RSAs) of 295 retirees for the month of July.

The commissioner stated that Gov. Babajide Sanwo-Olu-led administration had paid over N43 billion as accrued pension rights to 11,644 retirees in its public service from May 2019 till date.

Ponnle said: ” The state government recognises the plight of our estimable workers who have served in the Lagos state public service and the need to safeguard their financial security after service.

“Tp this end, it implemented the payment of the new minimum wage six months after the new wage bill was adopted as law and with a higher amount than the approved recommendation in response to global and national economic challenges.

“This is in line with the administration’s vision to cater for its workforce even in retirement.”

The commissioner congratulated the retirees, wished them the best and advised them to carefully review the retirement savings options available for them to utilise their money prudently.

She charged them to contact LASPEC or the Ministry of Establishments, Training and Pensions should they require clarifications or advice on their retirement benefit matters.

“Please embrace the joy and challenges of this new phase of life. Be prudent with your money and practice a healthy lifestyle to enjoy your retirement,” she said.

In his address, the Director-General , LASPEC,  Mr Babalola Obilana said the Sanwo-Olu’s administration deserve applaud for its constant support for the payment of pension obligations and the various policies initiated to better the lives of the senior citizens.

Obilana stated that the contributions of Lagos State to the success of the Contributory Pension Scheme in Nigeria was an undisputable fact.

” Lagos State is a trail blazer in the industry with 10 per cent employer and eight per cent employee contributions remitted monthly into individuals RSAs after salaries are received.

“The governor approved the automation of business processes in LASPEC to ensure first class service delivery to our dear retirees in order to accomplish the state government’s goal of the immediate payment of pension entitlements upon retirement from the public service,” he said.

The director general appreciated the efforts and contributions of the retirees whilst in the service, noting that the vision of a ‘Greater Lagos’ would have been an impossible dream without them.

Obilana urged the elderstatesmen to beware of any Individual or Association who claim to be affiliated with the state government and can process or fast track their pension entitlements for a fee.  (NAN)