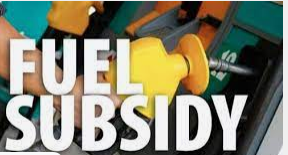 “PETROLEUM Subsidy” has assumed a life of its own and is operating in dual capacity as the Convener and the Chairman, Nigerian Governors Forum. Monthly, the 36 States of the Federation assemble in Abuja to collect their “share”, i.e FAAC, of the “national cake”.

In recent times, however, the new Chairman of the Nigerian Governors Forum, “Petroleum Subsidy”, takes the largest share of the national cake”, leaving crumbs for the remaining 36 States to share. In fact, it not only leaves crumbs for the states but the federal government, as well, has no respite from this new order that has seen the shrinking of its piece of the cake.

It will cost Nigeria, Africa’s second largest producer of crude oil, an estimated N4 trillion to subsidise the price of petrol in 2022. To put this cost in proper context to examine the magnitude of Nigeria’s subsidy cost, the cumulative budget size of the 36 States of the Federation for 2022 is N9.65 trillion. The total revenue realised in 2020 by the Nigerian National Petroleum Corporation, NNPC, Group, including all its subsidiaries was N4.6 trillion.

Similarly, the federal government generated N3.9 trillion as revenue in 2020. Petroleum Subsidy in itself isn’t a bad policy of the government, however, when a policy begins to fail and negates its intended objectives, it requires a critical assessment.

This is important because the futures of government, security, health, education and development depend on it.

Whatever the final decision the assessment will lead to and determine the fate and corporate existence of the nation referred to as Nigeria in no small measure.

According to the Petroleum Products Pricing Regulatory Agency, PPPRA, it cost Nigeria a cumulative sum of N8.94 trillion to subsidise petrol between 2006 and 2015. Nigeria’s 2022 petroleum subsidy budget is more than half what it cost the country to subsidise the product for 10 years.

In a study conducted by BudgIT, it was revealed that only 2 states, Lagos and Rivers, were able to meet their operating expenses with revenues generated internally in 2020.  The 34 other states had to significantly rely on federal transfers (which is made up primarily of oil revenue) and Value Added Tax (VAT) to implement their budgets. In the first quarter of 2022, the NNPC made zero remittance to federation accounts on the account of subsidy payments, leading to a notable reduction in revenue available to be shared by different tiers of government.  Without a doubt, Nigeria’s petroleum subsidy program in recent times has crowded out spending on physical infrastructure and needed investments in critical social sectors like health, education, water, sanitation and health, WASH, and social protection.

The burden of petroleum subsidy has continued to weigh down heavily on the Nigerian State owing to the highly volatile price of crude oil (with the attendant exchange rate differentials-driven challenges) and because over time, Nigeria has refused to improve its capacity to refine crude oil locally. Nigeria currently has 4 refineries—two in Port Harcourt, one in Warri and one in Kaduna—with a combined installed capacity to refine 445,000 barrels of crude oil per day.

Nonetheless, the four refineries continue to incur annual operational costs without refining a single barrel of crude oil per day. Worse still, the four refineries incurred a cumulative loss of N486.54bn between 2016 and 2020.  In the same vein, licences issued to more than twenty investors to engage in modular refining have not yielded the desired results due to pricing regulations and pipeline vandalism.

Smuggling of PMS has been a major driver of the increase in Nigeria’s petroleum subsidy cost. It is estimated that at least 15.6 million litres of PMS per day is smuggled across Nigeria’s borders to its neighbouring countries.  There exists a major incentive for the smuggling of PMS across Nigeria’s borders due to the major price disparity of PMS between Nigeria and its neighbours. While PMS currently sells for 165/litre in Nigeria, it sells for between N577/litre and N660/litre in the countries bordering Nigeria.

Despite the fact that it will cost Nigeria roughly N11bn daily to fund subsidy in 2022, very little has been done to establish an intelligence-driven accountability mechanism to track the “apparent distribution” of PMS across the federation and stem the smuggling of the product across Nigeria’s borders.

What will it cost Nigeria in the short run to remove petroleum subsidy?

There is no gainsaying that the removal of petroleum subsidy will significantly impact the lives of Nigerians, 83 million of whom currently live in extreme poverty. The removal of petroleum subsidy will in the short-run certainly have a multi-dimensional socio-economic impact on the lives and livelihoods of Nigerians. With an estimated population of over 200million people and a paltry power generation of about 4,000 megawatts.

Nigeria’s per capita energy consumption of 144kWh is below the sub-Saharan average of 180kWh and the Europe average of 6,500 kWh.  Majority of Nigerians have to rely on petroleum-powered generators due to poor access to electricity from the national grid to make up for the energy gap. Similarly, micro, small and medium scale enterprises have to rely on petroleum-powered generators to run their operations, resulting in a significant part of their operational cost being allocated to energy.

Furthermore, the major source of transportation for the majority of the populace, the bulk of whom are poor, is petroleum-powered vehicles. There is a correlation between the pump price of petrol and the price of basic commodities in the marketplace.  An increase in the price of petrol often results in a corresponding increase in the price of basic commodities in the marketplace. The World Bank has projected that the removal of subsidy will prompt an increase in Nigeria’s inflation by 3 basis points (3%). It is certain that the removal subsidy will in the short-run result in an increase in the price of goods and services, reduce the purchasing power of Nigerians, and push more Nigerians further below the poverty line. However, the current petroleum subsidy regime is unsustainable and will compromise Nigeria’s fiscal sustainability in the short, medium and long term, cripple service delivery and in the long run push a lot more Nigerians below the poverty line.

The “jury’s verdict” on Nigeria’s petroleum subsidy program is that it needs to end. However, the general perception is that savings from the removal of subsidy will not be utilized for pro-poor programs and improved service delivery. So the real questions are: “why should the average Nigerian pay more for a litre of petrol, if the resultant extra revenue that accrues to the government will not be used for causes that improves his/her life? Will subsidy removal create a fiscal space for improved spending in critical social sectors like health, education, WASH? Or Will it create a fiscal space for more plundering Nigeria’s commonwealth? These are critical questions that beg for cogent answers.

Expenditure patterns by the federal and subnational governments show that the country has historically not efficiently and effectively used the windfall of oil revenues to bridge Nigeria’s huge infrastructure deficit, improving universal health coverage and access to quality education and electricity WASH and improving other human capital development indicators. For emphasis, at the subnational level, state’s have prioritised spending on religious pilgrimages, airports, international worship and conference centres, and many other capital-intensive white elephant projects over investments in education, health, social protection, agriculture and (WASH).

At the federal level, the country’s annual budget seems to reflect the interests of the political elites and bureaucrats rather than the developmental aspirations/objectives of the country articulated in the National Development Plan. There are massive loopholes for corruption and expenditure inefficiency with the situating of projects in the budgets of MDAs that have neither the mandate nor the capacity to implement such projects and the inclusion of projects that should be the clear mandate of the subnational governments.

Many believe corruption is the major bane of Nigeria’s weak revenue mobilisation profile.

According to the House of Representatives, Nigeria lost $7 billion to subsidy fraud perpetrated by some oil marketers and their enablers within the civil service. Many of those indicted are yet to be brought to book. The Inability of the government to hold people accountable and establish strong deterrents for the commission of crime has encouraged more people to commit at alarming rates.

Considering the current cost of petroleum subsidy to Nigeria, its removal is an imminent reality; nevertheless, a couple of things need to be in place for the removal of subsidy to gain public acceptance.

The government recently deployed $1.5 billion to rehabilitate the Port Harcourt Refinery. Nigerians want to get value for money and see their refineries work, but this must be accompanied by transparent, accountable and verifiable government operations that are carried out with enough time for Civil Society to respond accordingly.

Secondly, through their budgets, the government projects and programs need to be geared towards pro-poor causes and reflect the aspirations of Nigerians. These projects must be conceptualised, mplemented, completed and continuously evaluated with citizens input. Every stage must involve the input of citizen groups to provide the much-needed legitimacy that the government seems to be sorely lacking.

Thirdly, the attitude of the political class and bureaucrats do not suggest to the average man that the country is broke and going through a revenue crisis. A case in point is the immediate past junior Education Minister and the Labour Minister purchasing presidential nomination forms for N100 million naira when Nigeria’s tertiary education system has been shut down for 5 months. Though this would involve a systemic evaluation of the norms of what is acceptable behaviour by politicians and bureaucrats, one thing is sure; citizens’ buy-in and trust in the government’s decision to remove petrol subsidies must be met with real behaviour change.

In this way, the citizens-the government’s primary constituents would provide the much-needed support for the transition away from the subsidy. In closing, it is essential to state that the government at both the federal and subnational levels and political elites cannot carry on with “Business as Usual” and expect Nigerians to accept “Business unusual policies.”