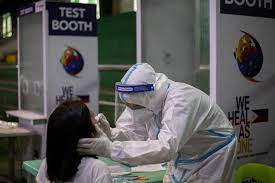 Friday’s record daily increase pushed the nationwide count in the Southeast Asian country to 702,856, including 13,149 deaths after 54 more patients died from the viral disease on Friday, the DOH daily bulletin showed.

“Our health care workers are being infected again after a drop in infections from November last year to February this year,’’ Vergeire said during an online briefing.

The DOH data showed that 82 health care workers have succumbed to the disease as of March 25. At least 15,662 medical workers, primarily nurses and physicians have contracted the virus.

Health Undersecretary, Leopoldo Vega, said the government was reopening the quarantine facilities and preparing modular hospitals in and outside Metro Manila in case the surge continues.

Vega told reporters that the DOH planned to use modular hospitals to treat moderate to severe Coronavirus patients.

“We need to expand the capacity for moderate and severe cases,’’ Vega said, stressing the need for step-down care facilities to de-congest the big hospitals in Metro Manila.

“For the last several days, the spike inactive and new cases is high in Metro Manila. Around 53 percent of new cases come from Metro Manila and adjacent Cavite, Laguna, and Bulacan provinces.