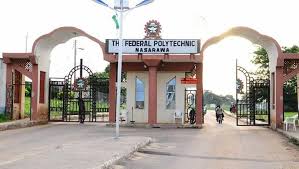 THE rector of the Federal Polytechnic Nasarawa, on Monday, commended the Minister of Works and Housing, Mr Babatunde Fashola, for his efforts toward bridging the infrastructural gap in the country.

DR Abdullahi Ahmed, made the commendation during the commissioning of a two-kilometer road project executed by the Federal Ministry of Works and Housing in the institution in Nasarawa, Local Government, Nasarawa State.

He said that the Federal Government had rescued the polytechnic from so many challenges with the construction of the two kilometers road, which was the first of its kind in the life history of the polytechnic since its establishment in 1983.

Ahmed said that the road project would not only make lecture halls, workshops and laboratories accessible but would also safeguard the massive investment of government that would have been affected by gully erosion due to lack of roads and drainages.

“I wish to express my appreciation to President Muhammadu Buhari, the Minister of Works and Housing, Babatunde Fashola, the Minister of State, Alhaji Abubakar Aliyu and other respected members of the management of the ministry for this rear gesture,” Ahmed said.

The rector said that construction of roads and drainages had remained among the major constraints of the polytechnic over the years.

“As you are all aware, the major funding source for infrastructure development in tertiary institutions is through the TETFUND intervention and there are limitations to the kind of projects that can be funded by the TETFUND, among which roads and drainages are not included.

“Our situation here in the Federal Polytechnic Nasarawa is so compounded because we are located in a flood-prone area, where most of our lecturer halls, workshops, and laboratories are very difficult to access during rainy seasons,” he said.

The rector, therefore, appealed for more road projects in the institution, adding that the polytechnic had a landmass of over 2,000 hectares.

“That is to say, there is much to do in order to have road network across the campus, and like I earlier stated, there is no any statutory avenue through which we can fund roads projects, except through intervention from the Federal Ministry of Works and Housing, which is very rear.”

Responding, Fashola said it was undebatable that quality of education would be impacted by the quality of infrastructure and the learning environment.

The minister said that the gap created by lack of infrastructure was steadily being bridged by a gradual process of repairs, renewal and construction of major highways and it had reached schools.

Fashola, who said that the roads project was part of the Federal Government’s investment in education, urged the management of the polytechnic to ensure the road was used properly. (NAN)

CGTN: What Are Generations of Chinese Communists Striving For?

Becoming deliberate in the quest for renewable energy –  Tony Attah.