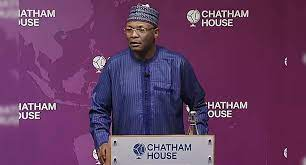 THE Independent National Electoral Commission (INEC) says preparations for the 2023 general election are largely being concluded as preliminary deployments are already underway.

INEC Chairman, Prof. Mahmood Yakubu, stated this in Chatham House, London, on Tuesday while addressing the world on preparations for the 2023 general election.

Yakubu, in his presentation which was monitored, said that the preparations for the elections began quite early.

He said that in the preparations, INEC learnt from some of its experiences in 2019, particularly the sore experience of having to postpone that election a few hours before it commenced.

The lessons, according to him, include early preparations for adequate planning, resourcing, and testing of its systems as well as early choice of election management tools, especially the main election technology.

He listed other lessons learned to include early finalisation of changes to the Electoral Act and early release of funds to the Commission.

Yakubu said that learning from all the previous challenges, INEC had worked with all concerned government agencies and stakeholders to ensure that the challenges of preparing for the 2019 general election were minimised this time around.

He said that a great deal of forward planning and engagements had been done and many aspects of its preparations attested to that.

He said one of such includes early conclusion of its new four-year Strategic Plan and Strategic Programme of Action (SP & SPA), as well as the 2023 Election Project Plan (EPP), over 18 months prior to the date set for the election.

Yakubu said that the early signing of the new Electoral Act into law also gave time for both the Commission and all stakeholders to fully acquaint themselves with any changes in their responsibilities and functions.

On election technology, Yakubu assured Nigeria that there was no going back on INEC decision to deploy the technology.

He said that in order to avoid the usual challenges with the application of new election technologies, INEC introduced and tested its innovations for the election early enough.

These technologies, according to him, include the INEC Voter Enrollment Device (IVED) for improved registration of voters, the Bimodal Voter Accreditation System (BVAS) for both voter accreditation and e-transmission of results for collation and the INEC Result Viewing (IReV) portal to offer the public access to view Polling Unit results.

He said that the deployment of the technology in previous major elections afforded the Nigerian public and the Commission opportunities to get acquainted with the device and to review its performance with a view to enhancing it towards the general election.

“For the Commission, several lessons have been learnt from these deployments and we believe that we are ready to deploy these technologies for the general election.”

He said that INEC was working with stakeholders for the launch of a data dashboard that captures all registered voters with disability in all Polling Units nationwide, disaggregated by type of disability.

“This will further ensure that we are able to better serve this community of voters.”

On procurement and logistics, Yakubu said that INEC had received the final batch of the BVAS to be used for the election.

He hinted that the commission, in addition to the deployment of the device in previous off-cycle elections, planned to conduct a series of mock trials of the BVAS with actual voters in real-time in parts of the country to further ascertain their functioning in actual election situations.

He added that other sensitive materials, such as the ballots and result forms, were being printed, while INEC was progressively taking delivery of them and deploying them to location across the country.

“Logistics has often been a major Achilles heel of elections in Nigeria. We are determined to solve the challenge.

“We have established a Logistics Management System, which uses an android application and web dashboard to track election materials from procurement through storage to delivery.

“For the first time, we have a comprehensive Election Logistics Framework (ELF) to guide logistics for the general elections from planning, through deployment to retrieval.

“This is the first deployment of an end-to-end logistics framework for elections.

He added that INEC had also signed a Memorandum of Understanding (MoU) with the umbrella bodies of road transport and marine unions in preparation for the elections.

He said both the 1999 Constitution and the 2022 Electoral Act provide that voters can only be registered and vote within the country.

“The Commission hopes that these legal obstacles will be cleared at some point to enable Nigerians in the diaspora to vote in elections.” (NAN)