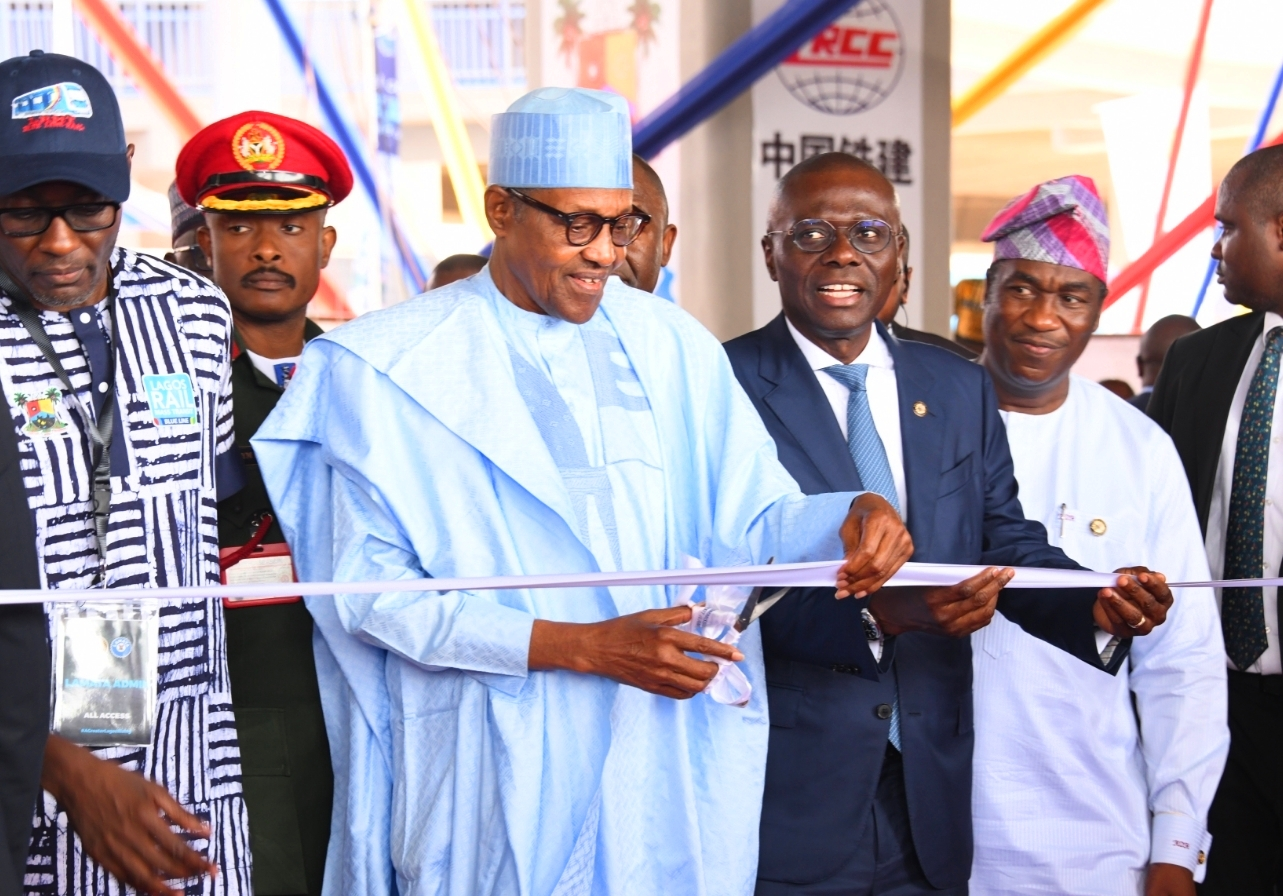 The first phase is a 13 kilometres stretch from Marina to Mile 2 and has five stations — the Marina Iconic station; National Theatre; Orile-Iganmu; Suru-Alaba and Mile 2.

The Blue Line is one of the six metro lines identified in the Lagos Rail Mass Transit (LRMT) master plan.

It is a 27 kilometres rail route that will run from Marina to Okokomaiko, when completed, and is being implemented in two phases.

Buhari arrived at the Marina Iconic Station at 11.25 a.m., in company with Gov. Babajide Sanwo-Olu of Lagos State.

He also witnessed the signing of the contract for the construction of the Second Phase of the Lagos Mass Transit Blue Line Rail.

The President took a ride on the train with Gov. Sanwo-Olu, Deputy Gov. Dr Obafemi Hamzat and other dignitaries.

Giving his remarks at the inauguration, Gov. Sanwo-Olu said that the Phase 1 of the Blue Line was expected to cover the stretch in less than 15 minutes, compared with the rush-hour time of 2.5 hours, if undertaken by road.

He said that the benefits of the rail line were obvious and unquantifiable, as it was a more efficient transport service that improved the quality of life of Lagos residents.

The governor said that the project would free up more of the residents’ time, reduce the pressure on the roads, and contribute to Nigeria’s lofty climate action obligations.

According to him, the Blue Line rail system will be powered end-to-end by high voltage electricity, to be supplied by a dedicated Independent Power Producer (IPP), as well as back-up systems.

”What this means is that the operation of this line will leave zero carbon emissions impact on the environment.

”This iconic Marina Station that is hosting us today will be the largest and busiest train hub in Africa, with a capacity to process as many as 400 passengers per minute, translating into 24,000 passengers every hour.

”When Phase 1 starts running fully, we envisage that it will transport a quarter of a million Lagosians daily, rising to half a million daily when the entire corridor is completed.

”Mr President, I thank you for the Federal Government’s support on this project and many others.

“You have made our work administering Lagos much easier in many ways, and we will eternally be grateful to you for this,” he said.

In his welcome address, the Deputy Gov., Hamzat, said that the state government’s transportation strategy was multimodal.

He said it brought together the various elements of road, rail and water in a seamless manner that made commuting an interesting experience.

Hamzat said that the rail project would help to reduce the pressure on the roads, enhance the economic wellbeing of Lagos residents and put Lagos State on the same pedestal as others of its stature.

He appreciated the residents for bearing with the government, in the face of all the inconveniences thrown up by the implementation of the project.

In his goodwill message, the Chinese Ambassador to Nigeria, Mr Cui Jianchun, said that the Blue Line rail project was a speed line, which would improve Lagos’ residents energy to do other things.

Jianchun said that the mass rail would give much energy and reduce time of doing business.

”Today we really understand the meaning of time, we need to sustain the usage of time for a greater efficiency.

”Nigeria and China have harmony in collaboration in sustainable development, the two countries have the same vision to move the countries forward,” he said.

The Chinese Ambassador said that Nigeria and China had identified 15 projects to collaborate on. (NAN)