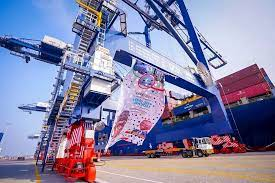 MEMBERS of the Organised Private Sector (OPS) have welcomed the inauguration of the Lekki Deep Seaport and Imota Rice Mill, Lagos.

They described the move as capable of leading to agricultural self-reliance and the actualisation of the country’s industrialisation agenda.

They spoke in separate interviews with the News Agency of Nigeria (NAN) on Tuesday in Lagos while reacting to the inauguration of some projects in Lagos by President Muhammadu Buhari on Monday.

NAN reports that the Imota Rice Mill, which has the capacity to produce 32-metric tonnes per hour, is the largest in Africa and third globally.

The rice mill is believed to have bright economic prospects due to huge consumption of rice in Nigeria.

Similarly, the 1.5 billion dollars Lekki deep seaport, a collaboration between government and private sector, is Nigeria’s largest seaport with a draught of 16.5 meters to accommodate very large vessels.

Dr Muda Yusuf, Founder, Centre for the Promotion of Private Enterprises (CPPE), said the development was very advantageous to various sectors of the economy seeing that facilities agriculture and trade.

He said that the seaport which was built to accommodate larger vessels was technological driven in line with global developments and its positioning in Lagos as the commercial nerve of the country was strategic.

Yusuf added that the Imota rice mill inauguration was in line with the country’s commitment to self-reliance in food production.

“The development means that moving cargo would become cheaper because the size of the vessels means more items can be moved at once and so industrialists should be able to get better deals in terms of costs.

“The technology in cargo handling and other processes is very good for the maritime sector and would drive trade, a critical component of the economy.

“However, there are concerns about how to conveniently evacuate cargo via the Lekki-Epe expressway that is already congested; government would have to address it. This is to ensure so the suffering of road users does not become elevated.

“For the Imota Rice Mill, there’s need to source for adequate rice padding to optimally utilise the capacity of the plant.

“It is also advised that the plant should not be run as a government enterprise, but it should run as a Public Private Partnership (PPP) arrangement; managed by private sector to get the desired outcomes from the mill,” he said.

Dr Chinyere Almona, Director-General, Lagos Chamber of Commerce and Industry (LCCI), said the projects would impact the economy due to its employment generation potentials.

Almona, however, stressed the need for proper implementation to ensure the projects delivers on its mandate to reap the economic benefits.

“There’s need to pay attention to all the other utilities and infrastructure such as good road network to and fro the area to make it a huge success.

“It is important that the right road infrastructure is in place as there’s already pressure on the road, particularly at the Lekki axis.

“These things are needed to enable the successful rollout of the projects to reduce pressure on the populace to ensure their standard of living do not drop,” she said.

According to him, the seaport and rice mill will boost international trade (import and export), boost industrialisation and further enhance food self-reliance.

“The rice mill will save billions of dollars in foreign exchange spent on rice importation alone and would generate more employment and create more wealth.

“I congratulate the government for achieving this milestone in our quest for industrial self-reliance,” he said.