Tony Schultz, a farmer in Athens, Wisconsin, United States of America, works hard to retain his family heritage in agriculture

“Don’t waste time on those onions. Just rub and they will peel off by themselves…snip, snip, like this,” snapped Tony Schultz to the reporter that cold afternoon in a section of the hall inside Stoney Acres farm, on the outskirt of Athens, Wisconsin.  It wasn’t just the reporter, who was spending time on his farm, Tony had said the same or similar thing to a couple of other staff, a number of times, over the past days. While that may sound repetitive, it’s evidence of the scrutiny this 39-year-old man brings to bear on his work. Whether it’s about rubbing or chopping onion, harvesting carrot, tomato, pepper, potato, Brussel sprout, Delicatta Squash, beets or whatever the season has to offer, Tony wants it done fast and well. His voice, at such times, alternates between high and low, with the unmistakable hint of one in charge. Leadership, some say, is best served from the front and Tony epitomizes this. A tall, imposing figure, the man looms large on his farm, which overlooks Rangeline Road in this rural part of Wisconsin. “He is driven,” a staff of the farm told me, the day I arrived. I would get to confirm this myself. His high work rate and commitment leave you in no doubt about his mission and reminds me of the central character in Things Fall Apart – Okonkwo. Like Okonkwo, whose father’s weakness was a strong motivation in his life work, Tony gets his kick – not from his own father’s weakness – as the man, Ed, is as powerful as his son, even if slowed down by age, but  in wanting to preserve a family legacy.

The farm was originally owned by Tony’s grandfather who sold it to his son, Ed who also sold it to Tony. That’s the way Tony defined the generational control that has seen him assume its current leadership since 2006. It’s a family heritage, a kind of trust that he would like to pass on to his own child someday. Originally a diary farm, Tony grew to see the farm’s fortune decline, culminating in his father selling off their cows as the market was no longer viable, for reasons that Tony also blames on larger market forces who determined who got what. Selling the cows left the then high school student sad, and he began to think that he could help turn things around, and being in charge now offers him the opportunity to do so. “We were put in a bad financial position when I was in high school and it was traumatic for me. My dad made the decision (to sell the cows) because the milk market was bad. We were losing farm, we were continuing to lose farm. So I wanted to reinvigorate that. Small farms are disappearing and I didn’t want my (family) farm to disappear and in order to save it, I had to come back to embrace its work and what it was and that’s what I did,” he said, adding “I believe in the economic democracy of small family farming that’s being lost in this country due to consolidation and capitalist concentration from the distribution to the processing level and now the production.”

His decision to work on the farm meant giving up a teaching job in a high school he secured after his university education and every other opportunity that America, his country, has to offer, including a career in Hollywood which he fantasized about. He, of course, has the looks, and could well have been giving some A list hunks in the film industry a run for their money and make the selection process of film directors difficult, but what Hollywood lost, the farm gains.

His hardwork on the farm is second to none. You need to be on top of your game to keep up with his pace and Alex, Justin, Bill, Hannah, Joe, Amber and others who work with him know this. His style might be viewed by some as overbearing or brusque but the man, as boss, isn’t stonehearted. There’s a soft spot to him. He is kind, and this occasionally reveals itself. No sooner had the day’s job ended than he is asking you to join him for some drink – beer or wine – or dinner. Food and drink on Stoney Acres is free for staff who number up to eight or 10 on a typical day.

By size, Stony Acres is a small organic farm but with a fame larger than its size. Apart from the fresh produce the farm is known for, which sells at the farmers or winter markets, Wausau on Saturdays, Stoney Acres is popular for pizza. Another of its attraction is beer, which is brewed by Josh Wright and Maple syrup, which Ed produces from trees around. Most vehicles that ply Rangeline Road on Friday and Saturday evenings, head to Stoney Acres where fresh and hot pizza is available. While primarily serving surrounding communities or towns like Athens, Wausau or Medford, people come from places beyond these areas to enjoy pizza and beer.

The number of customers, who visit Stoney Acres on Fridays and Saturdays, is in a sense, a testament to its acceptance. On November 3, Brad and John, from Bradford were part of the buyers. It was the last pizza night and Tony had declared free beer for the purchase of a pizza. Music blared from the loudspeaker while the hall was full with people. “The pizza is very good,” Brad told me.

John, on his part, said there’s something more to Stoney Acres beyond pizza or beer. “We first started coming out here this year. I always heard about it but just never made it out here. We’ve come out here at least a dozen times this year. I like bringing the kids out here. It’s not like a regular restaurant. There are animals and swings. This is what it should be like.”

Aside the restaurant or brewery, Tony operates a CSA (Community Supported Agriculture) that sees him deliver fresh produce to its subscribers each week. It’s an integral part of his work. “I need to make sure there’s a bountiful box for my CSA subscribers – that we pack their boxes and create a beautiful, bountiful produce and I need to make sure my farmers market is full and bountiful and looks good,” he says, with pride.

When not working on the farm, delivering produce to customers, preparing Pizza, Tony could be seen playing the role of a doting father to his three children: Riley, Ted and Maple. They are products of his relationship with his ex-wife, with whom he began life on the farm. But the marriage, against his expectation, crashed. That left him sad. Speaking of the experience, Tony said: “I didn’t want to have my marriage end. We (his ex wife and him) shared the vision of farming together. We had been married for over 10 years – 2006 until the beginning of 2017. We had been in a relationship for almost 13 years.”

Those close to Tony say the divorce left him unhappy. But the gloom, a source said, has disappeared. He is now happy, having fallen in love again. The person responsible for his joy is not his ex-wife but a woman named Katie Kalish, a professor of English. Tony describes her as “very lovely and nice to talk to,” and says it feels good to love and be loved. On Katie’s recent birthday, the love struck man showered encomiums on his woman: “On your birthday I want to recognize and celebrate all the magnificent things about you!  Your work as an educator, your support as a friend, your nurturing love as a mother, and the special place you’ve taken in my heart! You are beautiful! You are so sweet! You are amazing Katie Kalish!”

Long before Katie came into his life, however, Tony’s parents had, and remain still, a loving and supportive force. Describing his parent’s influence, Tony said, “My father was the farmer here from 1976 until 1998 and he taught me how to work. He demonstrated that you have to work and work hard constantly and when I came back to the farm, some of his machinery was here for me to use and he helped me do the beef hall. He is responsible for making hay. He makes the hay for the herd. When I need something done, built, prepared, he is often helping me with that. He has built me buildings and helped remodel buildings, the beer hall. He makes the Maple syrup. He still works very hard even though he’s in his mid-sixties. My mum is also very supportive. She plays with my babies and is very nurturing. She helps me clean my house, mows my lawn and makes me feel cared for.”

A politically conscious man, Tony views politics simply as the discussion of the “struggle over power; about who gets what, when.” Not for him, those who detach themselves from politics. Indeed, on the day of my interview with him, he had just returned from casting his vote in America’s mid-term election. To him, participation in politics is inescapable. “You have to participate. My farm is a political idea. I farm the way I do because of my understanding of history and ownership. I don’t want few people to own all the land, I want many people owing all the lands. My family sold our cows when I was 18. That informed my politics. We worked hard, why did we have to sell our cows?” He considers the current state of American and Wisconsin  politics “disgusting” and accuses Donald Trump of being “xenophobic and patriarchal”  and using ” blatant, absurd fear mongering tactics” that “appeals to racial, prejudicial fear in a more explicit way that any president has.” 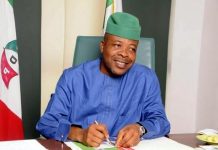 I underestimated the rot in Imo- Ihedioha

An Amazon in the Saddle