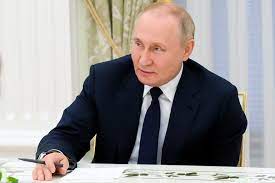 RUSSIAN President Vladimir Putin on Friday told a summit of the Shanghai Cooperation Organisation (SCO) that the group should consider staging its own major sports competition.

Putin said in a speech at a summit of SCO countries in Samarkand, Uzbekistan: “There are good opportunities to intensify sports cooperation with the prospect of holding major sporting events under the auspices of the SCO.

“To do this, we can think about creating an association of sports organisations under our association.”

Putin made clear that he wanted the group, which includes the world’s two most populous countries —- China and India —- to become a significant global counter-weight to the American-led West.

The West has turned its back on Russia over its invasion of Ukraine.

A Russian doping scandal, involving revelations of a state-backed system across many sports, had trailed the 2014 Winter Games in Sochi, Russia.

This has meant that Russian athletes’ participation at subsequent Olympics has been severely restricted.

Those that have competed have only been allowed to do so under a neutral flag.

China, however, has hosted both a Summer and a Winter Olympics since 2008.

But both events were to some extent overshadowed by war or preparation for war between Russia and former Soviet republics: Georgia in 2008 and Ukraine in 2022.

Belarus President Alexander Lukashenko, a close ally of Putin whose country is an observer at the SCO, told the summit: “We suggest the possibility of holding a complex of sports competitions within the framework of the SCO: summer events in 2024, winter in 2026.”

These dates broadly coincide with those of the Paris 2024 Summer Olympics and the 2026 Milano-Cortina Winter Olympics —- both being held in western Europe.

The SCO is a security bloc established in 2001.

It comprises China, Russia, India, Pakistan and four post-Soviet Central Asian states, and is in the process of admitting Iran, another state at odds with the West.(Reuters/NAN)