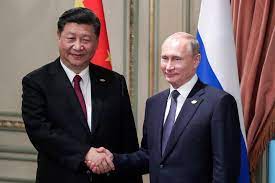 The Chinese president’s visit to Uzbekistan marks his first trip abroad in more than two and a half years.

Later on Thursday, he was expected to meet Putin for the first time since the invasion of Ukraine.

As Beijing and Moscow become increasingly isolated from the West, observers will watch for clues as to just how close Putin and Xi have become after nearly seven months of war in Ukraine.

Or whether their relationship is on shaky ground as the war’s momentum swings in favour of Kiev.

Both presidents met shortly before the start of the war for the opening of the Winter Olympics in Beijing and declared a limitless friendship between their countries.

Since then, China has backed Russia and portrayed the U.S. and NATO as responsible for the war in Ukraine.

Foreign policy experts say Xi and Putin see their partnership as providing a united front in facing down Washington.

While China supports Russia, Beijing seems to avoid violating international sanctions on Moscow in order not to become the target of punitive measures itself.

Nevertheless, trade between the two countries has increased sharply as Chinese products fill the market gaps in Russia caused by sanctions.

Turkish President Recep Tayyip Erdoğan, who has been blasting Washington and Europe’s provocative actions toward Russia, will also be in Samarkand.

At Friday’s meeting of the SCO Heads of State Council, Putin will deliver a speech about his vision for the future of the organisation and how to strengthen the Eurasian bloc.

It is the SCO’s first in-person leaders’ summit since 2019.

The group, which was founded in 2001 to promote greater security and political cooperation, included Kazakhstan, Kyrgyzstan, Pakistan, Tajikistan and Uzbekistan in addition to Russia, China and India.

Iran has so far held observer status, as have Belarus and Mongolia.

Uzbek President Shavkat Mirziyoyev welcomed Xi in person at Samarkand airport on Wednesday evening, where the Chinese president praised the comprehensive strategic partnership between the two countries, according to China’s Xinhua news agency.

The trip marked the Chinese leader’s re-entry onto the international stage after a long period of only participating in events remotely.

Because of the pandemic, Xi had not left the People’s Republic and hardly received any foreign state guests in Beijing.

According to Indonesian officials, he also wants to take part in the G20 summit of major industrial nations in Bali in November. (dpa/NAN)