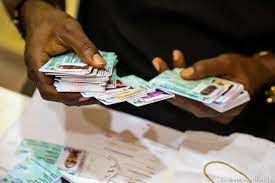 SOME residents on Thursday commended the Chairman of Ikorodu Local Government, Mr Wasiu Adesina, for sensitising and providing logistics to ease the collection of Permanent Voter Cards (PVCs) in their wards.

A correspondent of the News Agency of Nigeria (NAN), who monitored the exercise in different collection centres, reports that the exercise witnessed a high turnout in areas visited in Solomade, Agbele, Aga, Ijomu, Eyita and Ogunleye communities.

Mr Samuel Akinsanya, a resident of the Grammar School area, who collected his card at Ward A4 in Agbele, said that more people were encouraged to collect their PVCs due to the council’s effort to ease the process.

”This is a very good idea initiated by the local government chairman to ease the process  for those who live far from the wards.

”We thank the chairman for providing logistics for us to ease our movement, this is first of its kind, people are now coming out en masse,” he said.

Also, Mrs Olaide Shokunbi, another resident, urged the people of Ikorodu to collect their PVCs before the expiration of the time for collection.

She commended the chairman over the provision of logistics to facilitate the process.

”The PVC is an important tool for us to determine the next government, the process is easy now because there is free logistics,” she ssid.

Earlier, the council boss reiterated his commitment to ease the PVC collection process for residents by providing vehicles for the distribution and collection of PVCs within the area.

According to him, two different committees were set up to sensitise residents through the public address system and to convey people from one point to the other in their wards.

Adesina said: ”I will do everything necessary to ensure that more people collect their PVCs in order to vote during the election.

”I’ve set up a committee headed by the Council Secretary, Mr Lateef Afinni, to ensure more people get their cards.

”I also gave directives to all the councillors and the Supervisors to join the train to ensure that everybody from their areas collect their PVCs.”

A staff of the Independent National Electoral Commission, who spoke on condition of anonymity, said they attended to more people than previous days at the centre where she operated.(NAN)