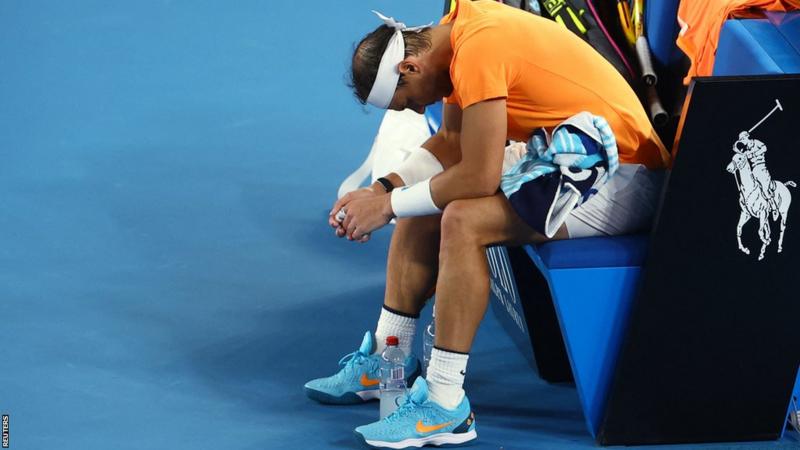 INJURED Rafael Nadal says he is “mentally destroyed” after his Australian Open title defence came to an end in the second round.

Spaniard Nadal struggled with a left hip problem as he fell to a 6-4 6-3 7-5 defeat by American Mackenzie McDonald.

The 36-year-old said he was carrying the injury before the match but the pain had been “nothing like today”.

“I really hope that it doesn’t put me out of the court for a long time,” Nadal said.

“It’s not only the recovery. It’s all the amount of work that you need to put together to come back at a decent level.

“I went through this process too many times in my career, and I am ready to keep doing it. I think, but that’s not easy.”

Speaking at his post-match news conference, 22-time Grand Slam champion Nadal said he felt he “cannot move” after his earliest exit at a Grand Slam since the 2016 Australian Open, when he was eliminated in the first round.

“[I] just can’t say that I am not destroyed mentally at this time, because I will be lying,” he said.

“Hopefully, it is nothing too bad. In the end [there] have been three positive weeks in terms of practice.”

Nadal was trailing by a set and a break when he pulled up with the injury, taking a medical timeout towards the end of the second set before continuing.

He said he had considered stopping “all the time” but “didn’t want to leave the court with a retirement”.

“Just try your best until the end,” added Nadal, who won his second Melbourne title 12 months ago. “It doesn’t matter the chances that you have. That’s the philosophy of the sport.

“That’s the essence of the sport by itself. I tried to follow that during all my tennis career, and I tried of course to not increase the damage, because I didn’t know what’s going on.”

This is the latest in a series of physical problems for Nadal, who admitted he had no feeling in his left foot during his victory at the French Open last year because of painkilling injections for the chronic injury.

He also withdrew from his Wimbledon semi-final last year with an abdominal injury he picked up in the previous match, and the same injury then hampered him at the US Open, where he suffered a fourth-round exit against Frances Tiafoe and appeared to injure his rib.

He said it was his love of the sport that keeps him going amid the injury setbacks.

“It’s a very simple thing: I like what I do,” he said. “I like playing tennis. I know it’s not forever. I like to feel myself competitive. I like to fight for the things that I have been fighting for almost half of my life or even more.

“When you do things that you like to do, at the end of the day, it’s not a sacrifice.

“Sacrifice is when you are doing things that you don’t want to do. And that was not my case. But of course it’s tiring and frustrating to [spend] a lot of my tennis career on recovering process and trying to fight against all this stuff all the time.

“But I accept it quite well during all my tennis career, and I was able to manage it well. But of course [the] last seven months have been, again, another tough period of time. I don’t know what can happen in the future.”