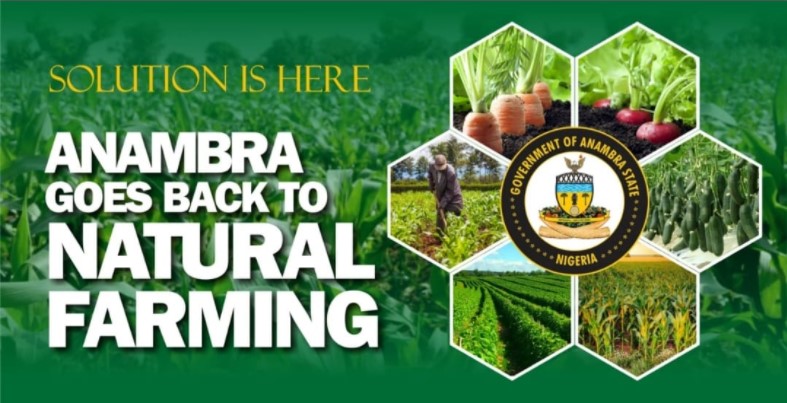 AGRICULTURE is the way to go now that the 36 States in Nigeria can no longer depend on federal allocation from Abuja. The oil boom days are gone for good. States can no longer pay their basic bills if they dont move away from FAAC-based revenue. The Governor of Anambra State, Professor Charles Chukwuma Soludo, has profoundly made the case for an agriculture-driven economy as an alternative.

The larger Nigerian economy has been facing dwindling fortunes due to the shortfall of the erstwhile handouts from petroleum revenue. States must perforce find innovative ways of making money, and the ready course that never fails is the issue of going back to land by embracing agriculture as the cornerstone of human development.

In the words of Governor Soludo, Since February this year, the share of oil in the revenue that comes to the Federal Government and States is zero. I saw the table – zero contribution from oil. What we share now is revenue from Customs duties, VAT, company tax, and most states cannot pay salaries because there is no oil money.

The Soludo administration is leading the charge in embarking on an aggressive agriculture-based economy that does not in any way depend on federal allocation. Mr. Governor delved into history to recall that the old Eastern Region under the leadership of Dr Michael Iheonukara Okpara experienced the highest economic prosperity when it was dependent on revenue from only palm oil.

It is against this background that Anambra State has decided to initiate a permanent empowerment programme of giving people palm and coconut seedlings which they could start harvesting and making money in a maximum period of five years.

According to Governor Soludo, This is why we say we are going back to where late M.I. Okpara stopped. He built Eastern Nigeria with money from palm oil. The cities of Onitsha with the Main Market, Enugu, Port Harcourt, Calabar, Aba and the rest were built with palm produce. They were well planned with pipe-borne water and electricity. All these were abandoned with the discovery of crude oil and revenue from it. But there is enormous room to maximise our potentials in palm production. Malaysia came to Eastern Nigeria to collect samples of palm, but today their export of palm is far more than Nigeria is exporting in crude oil. Today, we go to Malaysia to get improved seedlings that mature between 4-5 years.”

The Soludo Solution plan is such that a household that gets about 30 or 40 seedlings would be moved out of poverty permanently. So the government wants to plant about one million seedlings every year for the next 10 years and if this is achieved, it will give Anambra State more revenue than FAAC and IGR.

Agriculture remains a bedrock of Mr. Governors promise of adopting disruptive changes that will put Anambra State on the long-term path of sustainable transformation as embodied in Soludo Solution: A Peoples Manifesto. The cash crop revolution programme in the state is indeed an idea whose time has come.

The government has constituted a committee drawn from the three senatorial zones of the state to map out strategies for distributing the palm and coconut seedlings in the various communities. The palm and coconut economy will in due course become a major game-changer in terms of the diversification of sources of foreign exchange in the state.

Mainstreaming the regenerative agriculture system will of course entail the massive participation of the women and youths. By empowering women and the youths, the agriculture drive will harness the vast potentials of the farming community of the entire state.

Any community that abandons the vast gains of the traditional economy of agriculture runs the grave risk of going into extinction. It is thus incumbent on the teeming farmers to continue expanding their frontiers to maximize the opportunities provided by the government.

The regenerative agriculture revolution will intervolve skilled professionals working closely with the farmers in the state to ensure a systematic migration from chemical-based based farming to regenerative organic-driven farming that produces healthier foods. Besides the economic footprint, agriculture will hold the key to the health and well-being of the people.

Governor Soludos envisioned liveable and prosperous megacity is of course inconceivable without a functional agricultural system.