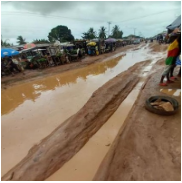 Faced with the absence of any form of government’s presence, the residents of Lafenwa, a town in Ado-Odo Ota, Ogun state, are appealing to Gov. Dapo Abiodun to repair the Ota road, which is the only road that leads to the town, which was constructed decades ago to reduce their suffering.

THE residents of Lafenwa, a town in Ado-Odo Ota, Ogun State, have cried out for assistance from both the local government and the Ogun state government for accessible roads in their communities. They have been forced to live without roads and security for decades.

Although Lafenwa is about 50km from Lagos and mostly populated by workers who commute daily to Lagos for their job in both the government establishments and the private sector, residents have complained that the old Ota road, which is the only road that links the town to neighboring towns of Ayobo and Obasanjo, Oju-ore, has been in a deplorable state for many years now.

A check by Realnews magazine showed that the full length of the road, from Ayetoro, Mopol roundabout, Kolab bus-stop, Cele bus-stop, MTN, Holy Saviour, to Lafenwa and down to Oju-Ore is hardly passable.

Some of the residents told Realnews that the poor state of the road has been their biggest nightmare since the road, which was constructed during the administration of Governor Gbenga Daniel has been washed away by flood.

Commenting on the situation, Mr. Femi Ajayi, a farmer and a pastor lamented the deplorable state of the road.

According to him, “All exit and entry points into this place from Lagos is so bad that you can compare it to life and death.

“Government at all levels have abandoned this particular community.

“The Community Development Association had to contribute to buy transformers, cables, and poles to bring in electricity.

“There has been no government presence except during elections and probably when they want to collect levies.

“Since I came to live here in 2014, this road had been bad, but this is the worse that the road has been due to about 10 years of neglect.

“The road was constructed during Gov. Gbenga Daniel’s tenure as the state governor, and even at that time, there was no provision for drainages.

Femi who insists that the neglect is not as a result of finance, but a general problem in the whole of Ogun State, explained that the bad road has destroyed many businesses and vehicles in the area.

“It is so bad that most petrol stations have had to close shop because tankers can’t access the area to supply them with petroleum products.

“I think that the government is overwhelmed, Ado-Odo Ota is one of the biggest revenue-generating local government in the state, yet it is not motorable.

“A lot of industrial activities are going on here compared to most local governments.

“It is about neglect and corruption,” he added.

Another resident of the area, Boniface Abuma, a credit officer, has also lamented the total abandonment of the community by the government.

“I see no reason why the government won’t fix this road. They come here during elections and make all the promises and still do nothing about it.

“The state makes huge revenues from this place through levies, shop permits, tickets, etc. these people know what they are doing.

“The road has never been good, it has only gotten worse, and we are completely shot out from the rest of the world and it gets even worst when it rains.

The state should at least learn from Lagos state,” he said.

Some residents, who live in the area and work in Lagos State have had to abandon their houses and moved to rented apartments in Lagos, while those who have dared to stay for the lack of a better alternative only return home at weekends.

Kenneth, one of the residents, however, believes that there is still hope.

“The people I pity most are the commercial drivers. They have to drive through the streets to get out and into this place. These adjoining streets are getting worse by the day and will soon become impassable.”

“It even gets worst during the rainy seasons. Any little rain and the old Ota road is a no-go area,” he said.

Kenneth, therefore, urged the government to come to their rescue and believes that the government of Gov. Dapo Abiodun can still do something to salvage the situation.