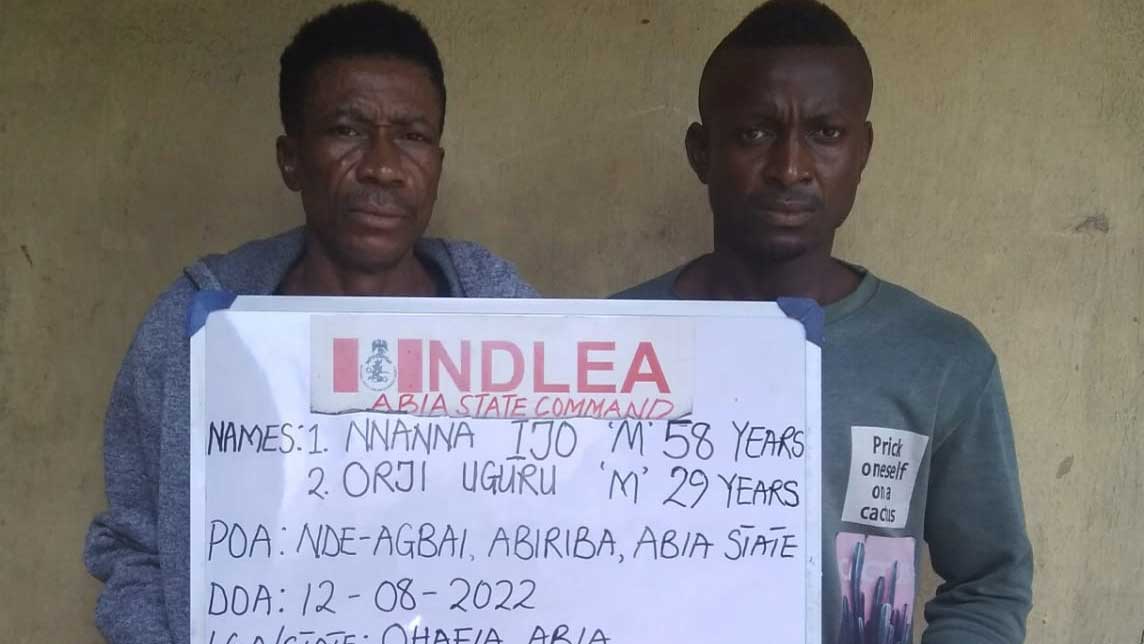 The suspect was arrested on Saturday, August 6, following his arrival from Addis Ababa, Ethiopia, onboard an Ethiopian airline flight.

The suspect, who hails from Anambra State, passed out the 77 wraps of the illicit drug in eight excretions spanning four days.

Spokesperson for the Agency, Femi Babafemi, in a statement, yesterday, said the 11.90 kg consignment was brought to the SAHCO export shed of the airport on Friday, August 5, by a freight agent, Adekunle Oluwapelumi Paul, 32, from Kogi State, who was promptly arrested upon the discovery that the seven cartons he presented for export contained parcels of the dangerous drug wrapped with foil paper and concealed in the heads of hundreds of smoked catfish.

The following day, Saturday, August 6, another consignment containing 1.45 kg of Cannabis sativa concealed inside granulated melon and crayfish and packed among other food condiments going to Dubai, UAE, was also intercepted by NDLEA operatives, who arrested 39-year-old Ajisefini Lateef,  a freight forwarder that presented the cargo for export at the SAHCO shed.

Meanwhile in Kaduna, three suspects: Saifullahi Sani, Salisu Nafi’u and Abdulrazaq Mamman, were arrested in Zaria on Thursday, August 11, with 1,112,350 tablets of tramadol (225mg and 100mg) weighing 38.3kg, while in Kano, a female drug dealer, Saratu Abdullahi, 28, from Wurno Council of the state, was nabbed at Hotoro with 541 blocks of Cannabis weighing 245kg.

The NDLEA operatives also recovered a total of 1,773.25kg Cannabis sativa at Ebute-Meta, Lagos Mainland Development area and Akala, Mushin, council of the state in separate raid operations between August 9 and 10.

At the Tincan seaport in Lagos, 86 parcels of Cannabis indica (Colorado) weighing 43kg were recovered from a 40ft container during a joint examination with Nigeria Customs Service and other security agencies. The illegal consignment seized on Friday, August 12, came from Toronto via Montreal, Canada and concealed in two drums inside a Mercedes Benz Sports Utility Van (SUV) in the container.

Two suspects, Nnanna Ijo, 58 and Orji Uguru, 29, were equally arrested on Friday, August 12 with various quantities of cannabis, heroin and cocaine at Nde-Agbai, Abiriba in Abia State, a week after Nnanna was released from detention over a similar offence committed in June.

While commending the officers and men of MMIA, AIIA, Tincan, Kaduna, Kano, Lagos and Abia commands for the seizures and arrests, Chairman/Chief Executive of NDLEA, Brig. Gen. Mohammed Buba Marwa (Retd) charged them and their compatriots across the country to always remain steps ahead of the drug cartels.

IN a related development, the Federal Operations Unit (FOU), Zone A of the Nigeria Custom Service (NCS), has handed over a total of 3,851kg of Cannabis sativa worth N308 million to the NDLEA.

The acting Comptroller, FOU, Zone A, Hussein Ejibunu,  told newsmen that two suspects, Ebuka Mbamalu and Iruka Chita, were arrested in connection to the Cannabis along Ogere-Ilaro Expressway.

According to him, the two suspects have been handed over to the NDLEA for further investigation and prosecution. He stressed that the suspects were in possession of 627.0kg and 80 parcels of Cannabis sativa respectively.

Ejibunu stressed the importance of synergy existing between the Customs and the NDLEA. He said: “As a nation, it is our responsibility to ensure the security of lives and property and to ensure that illicit items do not find their way into the country. Cannabis sativa is a substance that is widely used by criminals, kidnappers, bandits and even Boko Haram, they use this substance to charge up in a way to allow them to carry out dastard acts.”

Speaking earlier, the state commander, NDLEA, Callys Alumona, appreciated the collaboration between the Service and the NDLEA.

https://629101aec3513b3a9694750b1f97ab7e.safeframe.googlesyndication.com/safeframe/1-0-38/html/container.html
Alumona, who was represented by the Deputy Commander, Operations and Intelligence, Lagos State Command, NDLEA, Augustine Yusuf, said the synergy between the two agencies would stop cross border illegal trade and importation of illicit drugs.

“Our motive and action have been so clear and it is to let everyone say no to drugs, and we have been doing our best by enlightening the public, which is evident under the leadership of the current chairman of NDLEA to intensify drug abuse control.

“We have put in place a grand strategy, which is called War Against Drug Abuse (WADA), and we are taking it to the grassroots so that more people will be enlightened for them to make the right choices in their lives,” he said.

He commended the Nigerian Customs Service for the feat, noting that NDLEA will conduct investigation and those, who made the arrest, will avail the agency with useful information for possible prosecution.