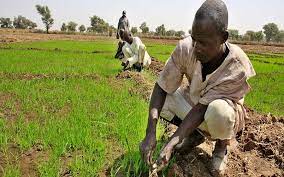 THE Federal Government has distributed agricultural inputs to smallholder farmers in Northwest to boost food production.

Distributing the items on Tuesday in Kano, the minister of Agriculture and Rural Development, Dr Mohammad Mahmoud, said that the gesture was to enhance rice production in all parts of the nation.

He explained that with regards to the high rate of rice consumption in the country, government could not afford to rely on importation of the commodity, hence all the needed support would be accorded to farmers, to enhance rice production in the country.

Represented by the Deputy Director Rice Value Chain, Alhaji Usman Bashir, further said the purpose of the intervention was to bolster rice production in all parts of the country, saying that as a staple crop, rice was consumed in virtually all our homes.

“As a staple crop, rice is consumed in virtually all our homes across the country.

“We therefore cannot afford to rely on importation of this important food item and be exporting labour outside the country while our citizens can grow and produce it sufficiently,” he said.

Mahmoud noted that the ministry had produced and distributed high quality Early Generation Seeds (AGS) through the National Cereals Research Institute (NCRI) to produce more certified seeds for distribution to farmers at the grassroots, to encourage community seed production.

“The ministry has produced and distributed high quality Early Generation Seeds (AGS) through the National Cereals Research Institute (NCRI) to produce more certified seeds for distribution to farmers at the grassroots, to encourage community seed production.

“We are also producing and distributing Flood Tolerant Certified seeds of FARO 66 and 67 to farmers along the riverine areas to mitigate the effect of flood and other natural disasters as witnessed recently.

He added that the ministry provided farm equipment in form of power tillers, transplanters, rice reapers, threshers and other simple farm tools to small holder farmers in different locations at subsidised rate.

According to him, there is also an upgrade in the milling process, new rice mills are springing up in the process of reestablishing integrated rice mills in strategic rice production clusters.

He tasked the beneficiaries to make judicious use of the inputs to produce more food for the nation.

Some of the beneficiaries who spoke to the News Agency of Nigeria (NAN) thanked the Federal Government for the gesture and promised judicious use of the inputs.

They also reaffirmed their commitment and support in enhancing rice production in the country. (NAN)