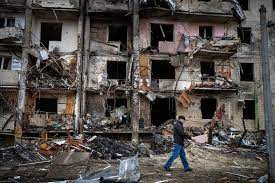 RUSSIA has attacked targets near the Ukrainian capital with kamikaze drones for the first time, according to Kiev authorities.

“There were six hits and explosions,’’ said Kiev Governor,  Oleksiy Kuleba on Telegram.

Infrastructure was hit, and one person was injured in the small town of Bila Tserkva.

The air force reported that 12 Iranian drones flew from the south toward the targets.
“Six of them were shot down’’ both by soldiers and anti-aircraft missiles, said spokesperson Yuri Ihnat
to Ukrainian television.

The information cannot be independently verified.

A military barracks site in Bila Tserkva was the target, according to media reports.

The closest Russian soldiers were located about 380km to the south.

Belarus, allied with Russia, is about 180km away from the town. (dpa/NAN)