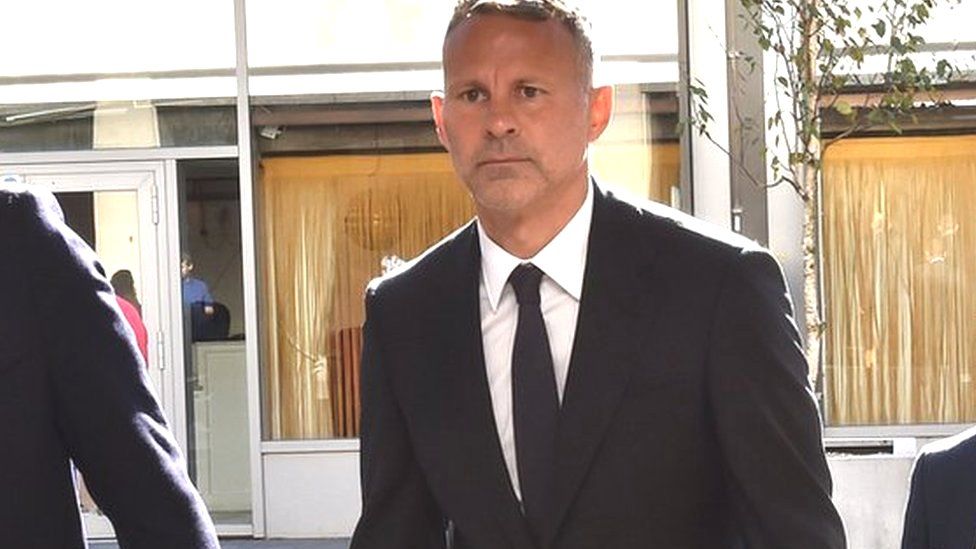 Ryan Giggs’ ex-girlfriend has told a court she became “a slave to his every need and every demand”.

The former Manchester United star and ex-Wales manager, 48, is on trial accused of controlling behaviour and assaulting Kate Greville and her younger sister Emma.

During cross-examination, she told Manchester Crown Court: “He made me feel like I had to do what he said otherwise there were consequences”.

He has denied all the charges.

Ms Greville agreed she made a number of witness statements to police following the alleged assault in November 2020, including two in the last week.

Chris Daw QC, representing Mr Giggs, asked: “In the course of those statements, did you tell the police the whole truth?”.

She also rejected claims an argument between the couple in Dubai in September 2017 “were a complete pack of lies”.

Ms Greville has claimed Mr Giggs dragged her naked across the floor of a hotel room and threw her and her belongings into the corridor, bruising her arm in the process.

She did not tell anyone at the time about the incident as she was ashamed, and said that text messages in the days afterwards, where she told him “I love you my gorgeous man”, were genuine.

Mr Giggs is charged with controlling and coercive behaviour against Ms Greville between August 2017 and November 2020.

He is also charged with assaulting Ms Greville, causing her actual bodily harm, and common assault of Emma Greville at his home in Worsley, Greater Manchester, on 1 November 2020.

“It was me being genuine but Ryan had this way of turning everything around on me,” Ms Greville said.

“I would be made to feel everything was my fault, so I felt I had to overcompensate.

“It’s difficult to explain. We had this turbulent relationship. Obviously we had this argument but I desperately wanted this relationship to go back to the way it was.

“I was in denial about actually what had happened. I would never talk to him about it.”

She also denied the bruise on her arm was caused by rough sex.

The barrister also questioned Ms Greville about her relationship with the former footballer and how they got together.

“I was in a vulnerable position and he played on it,” she said.

Mr Daw asked: “This was not just two consenting adults, both equally married at the time, who embarked on an affair?”

The witness replied: “There was a degree of imbalance on my side because of the situation I was in with my ex-husband.”

Ms Greville told the court she was not happy and in a “controlling marriage”, and noticed Mr Giggs was interested in her.

She said Mr Giggs used her name a great deal, a technique she had read about from the psychology book How to Win Friends and Influence People.

Mr Daw suggested she was implying there was some sort of “clever psychological game” in play.

He said: “The impression you give is you only really had an affair with Ryan because you were unhappy and he basically reeled you in?”

Ms Greville replied: “I’m not saying it was all one-sided. I was fully involved in that. There was things about him that definitely were luring me into a relationship.”

But Ms Greville responded saying: “Absolutely not. I felt like he was using techniques. I was vulnerable, that’s a fact. I was in a controlling relationship. That’s a fact.”

She told the court Mr Giggs’ alleged controlling behaviour also affected her friendships and that “he isolated me from certain people”, adding he also “interfered with my ability to interact with my family”.

Ms Greville told the court violence by Mr Giggs was “not regular” and he would use aggression more as a form of control.

Mr Daw asked: “Do you say he undermined your confidence, your self-esteem and was disparaging to you generally in those ways?”

She said: “Yes, on the whole he was, but on the other side it was like two extremes. Other times he would give me confidence.

“He was not constantly awful, not constantly horrible. It was hot and cold. Two different people. The result of his behaviour… undermined my self-confidence.”

She said he had also undermined and damaged her business.

The court heard Ms Greville gave a statement the day before the start of the trial in which she said she had felt like “a slave” to the defendant.

She said: “That is what it felt like. When Ryan said do something, I would do it.

“There was resistance sometimes but he made me feel like I had to do what he said, otherwise there would be consequences.”

Ms Greville said she is “really into psychology” and during the relationship she Googled what was happening in her relationship.

‘Relationships with eight other women’

“The thing that came up was not coercion, there was narcissistic personality disorder,” she added. “And what I was experiencing was very similar to that.”

She also denied she was looking for compensation when the case ends.

Mr Daw asked if for the majority of the time the couple were together, he was kind and loving to her.

Ms Greville said: “To begin with, yes. I would say for four-and-half years he was nice and for a year-and-a-half he was not. Near the end it was much pretty much relentlessly awful.”

She said she had noticed a “significant change” when she returned to Manchester in January 2018.

Around the same time Mr Giggs was applying for the manager’s job of the Wales national team but she said it was not the workload which led him to become more distant.

“There was obviously other things going on in his life as well,” she said.

The court also heard the following month Mr Giggs’ daughter found out about couple’s relationship from a Valentine’s card Ms Greville sent while he was still married to his wife Stacey.

Ms Greville said: “He was lying to them, so it was making the situation worse.”

In 2019, Mr Giggs is said to have sent an email following a row with the title “blackmail” and a video attached.

Jurors heard this was sent after Ms Greville blocked Mr Giggs on WhatsApp and he was trying to get her to respond.

She told police she suspected the attachment was, “one of our videos that we had done” and he was threatening to share it with work colleagues if she did not unblock him and respond to his messages.

Mr Daw said: “Mr Giggs would have significant interest in private sexual videos getting into the public domain. You knew full well it was not a sexual video,” he added claiming she had watched it.

The barrister said Mr Giggs had deleted the videos and, when the couple got back together six weeks later, he asked Ms Greville to send them to him again, which she did.

Mr Daw asked: “Did it not cross your mind at some future date that the issue may arise again?”

She replied: “I thought he had changed and he was in a different place. This was the same cycle of things. He promised he would change.”

‘Standing up for myself’

She said things “ramped up” during the first Covid-19 lockdown when they lived together.

Ms Greville said the abuse was verbal but became written in messages and emails towards the end of the relationship because “I was standing up for myself”.

The jury previously heard Mr Giggs grabbed her by the shoulders and headbutted her in November 2020 after she earlier confronted him about his alleged serial cheating.

She said in the lead-up to the alleged assault, she had learned he had “full-on relationships” with eight other women while they were together.

The discovery of messages “going back years” on his iPad prompted her to decide to leave him, she said.

The court heard the police wanted Kate Greville to hand over her phone as part of their investigation but she told them she lost it at the end of last year when it dropped in a river as she “tried to rescue my dog from the water”.

Another phone went missing when she was mugged in Market Street in Manchester city centre which left her “distraught”, she added.

The court heard police told her any data could be retrieved from iCloud but she did not want details of her business revealed.

Queried over his line of questioning, Mr Daw told the judge it was “designed towards the proposition that the witness deliberately withheld information that would undermine the case against Mr Giggs”, which she denied.