As part of efforts to empower youths and develop sports at the grassroots, the Abdul-Lateef Isiaka Foundation (AIF) has launched an Under-20 football competition in Saki Federal Constituency of Oyo State.

Alhaji Isiaka Abdul-Lateef, the sponsor, made this known in Saki on Sunday during the unveiling ceremony and a news conference to herald the maiden edition of the competition.

The News Agency of Nigeria (NAN) reports that the 40 year-old sponsor, who was born in Saki is the Chief Executive Officer of Pyramid Clearing and Forwarding Company located in Lagos.

NAN reports that no fewer than 30 clubs from Saki West, Saki East and Atisbo Local Governments would participate in the competition scheduled to commence in March this year.

He said that the objective of the competition was to promote unity and reactivate his interest in sports development in Oke-Ogun area of the state.

“To reactivate my interest in the area of sports development in Oke-Ogun. The competition shall be called Alhaji Isiaka Ayanwale Abdul-Lateef Under-20 Football Competition.

“The competition shall be open to all youth clubs in the three local governments – Saki West, Saki East and Atisbo in our Federal Constituency of Oyo State, who shall not be below the age of 18 years and above,” he said.

Abdul-Lateef said that the competition would be an annual event, promising that winners would go home with trophies and cash prizes.

Coach Kehinde Adetola, the Coordinator of the competition, said that the annual tournament was the first of its kind in the constituency and would no doubt add value to sports development in the area and Nigeria.

Adetola, a former Assistant National Coach of Flying Eagles, said Saki area had been lagging behind in terms of sports development and commended the sponsor for the initiative.

“Sports is the only unifying factor that brings us together and binds us together during joy and distressed period. Now for Ayanwale to be able to do this, he will add to sports development in Nigeria and Oyo State.

“We want our players to be more exposed to Shooting Stars, Crown Football Club of Ogbomoso, some of the teams in Lagos and even Nigeria national teams as a whole,” he said.

He gave an assurance that the coaches would be empowered to scout for talents and promised that talented players would be nurtured and marketed to senior clubs in Nigeria as well as abroad.

Adetola said that important measures would be evolved to curb all forms of indiscipline and corrupt practices among players, coaches, match officials and other participants.

Niyi Alebiosu, the Oyo State Chairman, Sports Writers Association of Nigeria (SWAN), was excited about the development and the turnout witnessed at the event.

“If somebody could do this, let us just encourage him because this is grassroots and we can only do anything to gain stardom through the grassroots. So, I am happy and wish the donor, Alhaji Isiaka success.

“I want to appeal to all teams and coaches to be more disciplined; that is key. Indiscipline will not encourage many sponsors.

“They should be disciplined; lead by example and I wish them the very best of luck,” he said.

NAN reports that the event featured the unveiling of the competition with the presentation of trophies and
distribution of football kits, such as balls, jerseys, to participating teams.

Among those present at the event were, Alhaji Muritala Okoko, Chairman, Saki Parapo Association, representatives of Oyo State Sports Council, Oyo State Football Association and a hosts of others. (NAN) 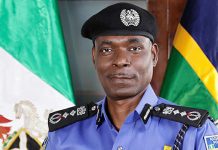 The Grammar of Coronavirus