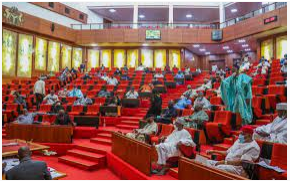 THE Senate Committee on Ethics, Privileges and Public Petitions has given the Code of Conduct Bureau (CCB) two weeks to settle corruption-related crisis rocking the agency.

Isah and six feuding commissioners of the bureau appeared before the committee on Thursday as directed last week Friday.

“This committee is the ombudsman of the Senate; the voice of the voiceless in the Senate.

“You are stakeholders. Before the president appointed each of you to represent the people, he must have found you to be men of integrity.

“We have given respect to the agency because it is the number one anti-corruption agency created by the Constitution.

“We give you two weeks to resolve your matter,’’ Akinyelure said.

The aggrieved commissioners, led by Dr Emmanuel Attah had written a petition to the Senate alleging that Isah was blocking investigations against public officers with multi-million and billion naira assets not stated in their assets declaration forms.

On the strength of the allegations against him, the CCB Chairman was to appear before the committee last Friday but was absent while five out of the six commissioners were present.

One of the commissioners, Mr Ehiozuwa Agbonayinma, alongside others told newsmen that they petitioned the chairman to save the CCB from self-inflicted incapacitation slammed on it by the chairman. (NAN)