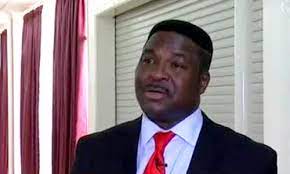 I think for once, something good has come out of Egypt.At least just for once. The Senate firmly rejected the nomination of Ms Lauretta Onochie as INEC Commissioner representing Delta state. This happened just before the anti-democracy and anti-people National Assembly (NASS) – INEC electronic transmission transfixion debacle. Interrogating this national disgrace is for another piece. But, something positive did emerge from the “take a bow” 9th Senate of the NASS last week.

Surprisingly this was from the NASS which I had described in an earlier write up as the worst NASS to have emerged in Nigeria ever since the days of Dr. Nnamdi Azikiwe and Dr Nwafor Orizu during the first Republic. The brightest and most progressive of them all was the Dr. Bukola Saraki and Dr Ike Ekweremmadu-led 8th NASS. It weaned and nurtured democracy. It stood its ground fearlessly and demonstrated its independence as one of the three arms of Government and a strong building block of our fledgling and stunted democracy.

However I do not agree with the Senate that the real reason for Ms Lauretta Onochie’s, rejection was anchored on the Federal character Principle requirement, because Mrs May Agbamuche-Mbu, A serving INEC Commissioner is from Delta State, just like Onochie. I think that was a mere face-saving device and simulated soft landing strategy for the Senate in refusing to square up to the whole truth of the matter.

65 years old Sexagenarian, Lauretta Onochie, born 19th July, 1955, had fervently and publicly denied being politically partisan during the Senate screening. I could not believe my ears. The whole world knows that she had registered as No. 2 in Ward 4, Aniocha North L.G.A. of Delta State, during the recent APC Nation-wide membership registration exercise. More curious about her incredible and incredulous denial stems from the fact that in an affidavit she personally swore to in the case of LAURETTA ONOCHIE VS EMEKA AGWUONYE (as recent as 30th June, 2021), which is currently pending before the FCT High Court, Abuja, she had attached her own passport photograph. In that case, Onochie had deposed affirmatively in paragraph 3 inter alia, thus: “I am also a member of the All Progressive Congress and a Volunteer at the Buhari Support Organisation (B.SO)”.

I could therefore not believe my eyes when I beheld her frontally and publicly denying membership of the APC and an ardent supporter of President Buhari.
Onochie’s nomination as INEC Commissioner representing Delta State (and by extension, the South South) had therefore triggered national outrage and ruckus because of her glaring political partisanship. Constitutional, democratic and moral hurdles were thus cited by a cross section of Nigerians, including politicians, Lawyers (I am one of them), the opposition PDP, public officers, analysts and the Civil Society, as afflicting her desperately sought-for appointment. Inspite of this, Onochie boldly appeared before the Senate for screening.She strangely and imperiously thumped her chest as “Madam Due Process”.
Really? Not so fast, madam! She then lied before a bewildered Nation, “since Buhari was elected as president for the second term, I have removed myself from everything about politics. Since 2019, I do not have anything to do with politics. As I am sitting here, I am not a member of any political party in this country”. I wept for Nigeria and for decent womanhood beholding a desperate old woman lying between her teeth, just to get a mere INEC appointment. At 65! This is the age most Civil Servants retire to their homes. What is in this INEC seat to force a woman to throw away her dignity and self respect? Onochie LIED.

For starters, her recent registration as No 2 in Ward 4, Aniocha North LGA of Delta State, during the recent registration exercise shows the falsity of her declaration. Secondly, an affidavit she personally deposed to in a case in which she is the plaintiff as lately as 30th June, 2021, also clearly affirmed that she is still a member of the APC and a volunteer at the Buhari Support Organisation (BSO). Wait for the icing on the case: on June 24, 2020 ( well after she claimed to have quitted partisan politics in 2019 ) , she had made an outing by tweet on the social media, promoting the APC, and stating that the party was merely going through the pangs of a growth process. This was during the leadership crisis that engulfed the APC, threatening to consume this party of disparate tendencies. In my humble opinion, this brazen denial of her membership of the APC during her screening demonstrated, more than anything else, her total lack of integrity and moral high grounds in being entrusted with such a sensitive job that borders on midwifing the will of the people. It was impunity taken too far.

Let me be very clear about this. There is nothing wrong about Onochie belonging to the APC, or to any other political party of her choice. There is also nothing wrong with Onochie rolling out the drums to support President Buhari, whether before, during, or after the 2015 and 2019 presidential elections. These are her inalienable constitutional rights. But, she cannot enjoy these rights simultaneously with being an INEC Commissioner. She cannot be a bat who argues that she belongs to the Animal Kingdom, because she possesses mammary glands (breasts), pinnas (ears), and teeth, like those of human beings; but that she is, at the same time, a member of the Birds Kingdom, because she can fly very well. As the name suggests, the Independent National Electoral Commission” is expected to be truly independent. The word “independent” means “liberated”, “unrestrained”, “unconstrained”, “bold”, “individualistic”.
Can 65 year old Onochie, a die-in-the-wool APC fanatic, pick up the Holy Bible (as a Christian) and swear that if she had been cleared by the Senate as INEC Commissioner, she would have been truly unrestrained, unconstrained, bold, individualist, and liberated from the apron strings of Buhari and the APC? I think not, or, do you? Could Onochie have been so independent and liberated from her benefactor ,Buhari, and her political party, in such a way and manner as to take firm decisions in an election against their interest? I think not. Or, do you?

Indeed, Part 1 paragraph F to the third schedule of the 1999 Constitution provides that Resident Electoral Commissioners shall be persons of “unquestionable integrity”. Can Onochie, a member of a political party who is crazily and passionately partisan to her party and her benevolent appointor, the President, be a person of “unquestionable integrity”? I believe not. Or do you? Her mere admission of once belonging to the APC and supporting Buhari, but that she had recanted and renounced them ( even if believable), are the very reasons why she should never come near the corridors of ballot papers and boxes.

The truth of the matter, and I can categorically conjecture why Onochie was rejected, is that she has been one of the most fantatical and consumate supporters; and a vociferous card-bearing member of the APC. She is not just an APC card-carrying member; she has always been the Personal Assistant to President Muhammadu Buhari on Social Media Affairs. She loves wearing a long ankle- length t-shirt emblazoned with a larger-than-life portrait of Buhari. She deifies him; canonises him.No problem about this; it is her right.But, please, Onochie, stay far away, far far away, from the hallowed precincts of INEC. Keep Off please !!!

Onochie has always used the social media outlet to attack every and all Nigerians that dare to disagree with her mentor and deity, Buhari. She abuses them all. Freely. She deploys obscene expletives, caustic language, utmost vulgarity and asinine inanities.

Waziri Atiku Abubakar was not spared by Onochie’s putrid vituperations. She accused him of shopping for terrorists in Dubai and being a wanted man. Atiku is in court against Onochie over this. I am his lawyer. Onochie had also attacked me in the social media some years ago, for daring to criticize Buhari, her god. I refused to dignify her with a response, so as not to belittle my humble self. But, she was not so lucky with roaring and cerebral Chief Femi Fani Kayode ( FFK), whom she dared attack. She had touched the tiger by the tail. FFK would not accept that, not let go. He took her to the cleaners and literally tore her to shreds. With bare knuckles; intellectual superiority. I had guffawed.

Therefore, such a palpably partisan person was not fit for, or confirmable for the sacred position of INEC Commissioner. She would have been the biggest liability to this already baggaged government. She would have further polluted the electoral process, since she is a known unabashed presidential aid and a card-carrying member of the APC , who can never go against her boss or political party in any matter involving elections. She was brutally partisan. She did so without any remorse, sense of guilt or shame whatsoever. Her rejection was therefore good riddance to bad rubbish.

My kobo piece of advice to Lauretta. Madam, quietly stay put in your propaganda corner with your job as Buhari’s social media attack dog. In this, I believe you have done pretty good. I score you well above average. But, for INEC job, farewell! Goodbye!! Adieu!!!

I therefore salute the Senate of the 9th NASS for developing balls for the first time; at least on this singular occasion. Kudos to the Ahmed-Lawan led Senate on Onochie’s rejection as INEC Commissioner.