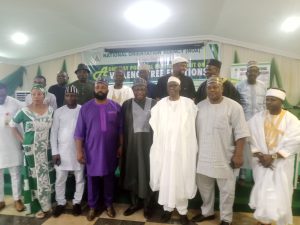 THE National Orientation Agency (NOA) has urged political parties and their supporters to refrain from adopting violence as a strategy for winning elections.

The Director-General, NOA, Dr Garba Abari, gave the advice in Abuja on Thursday, at a one-day Political Parties Summit on Violence-Free Election.

According to him, politicians should be mindful of the fact that if violence increases, their chances of electoral success will be greatly diminished.

“It is against this backdrop, the NOA is hosting this one-day Political Parties Summit on Violence-Free General Elections, come 2023.

“Political parties and their leaders have a huge role to play in voter mobilisation for violence free elections and avoidance of vote buying and selling.

“They also have a role to play in mobilising against voter apathy; these can be achieved through intensified voter education and programmes and policies driven campaigns,’’ he said.

In his remarks, the Chairman, Inter Party Advisory Council, Alhaji Yabagi Sani, commended NOA for organising the summit, saying that such engagement would curb electoral violence and vote buying.

Sani said that violence in any election would trigger loss of government revenue and properties.

”Volence also dissuades domestic and foreign investors. It paves way for people who are corrupt to be elected.

“So, at the end of the day, the nation will not have competent leaders that will provide solutions to the problems that we are having.

“But when citizens are properly educated, especially when they know the implication of what they are doing to the nation, they will be disinterested in anything that will create violence,’’ he said.

Also, Hajia Lami Lau, the National President, National Council for Women Societies (NCWS), reiterated that political parties should shun all forms of violence and play by the rules of the game.

Lau, represented by the Director of Programmes, Mrs Nnena Emedolibe, said that NCWS would always be the vanguard of good behavioral attitudes and promote information dissemination through its platform against violence during election.

Yakubu, represented by the Director, Election and Party Monitoring, Mr Aminu Idris, said that the commission had created an enabling environment for greater knowledge about the processes and rules of the election. (NAN)