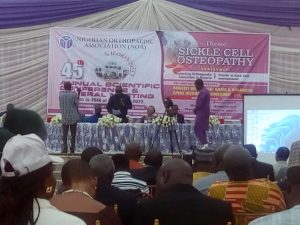 Stakeholders at the 45th Annual and Scientific Conference of Nigerian Orthopaedic Association (NOA) in Ilorin.

The week-long conference is themed: “Sickle Cell Osteopathy”, with sub-themes — “Promoting Orthopaedic Education in Nigeria” and “Trend in Management of Back Pain”.

The News Agency of Nigeria (NAN) reports that sickle cell anaemia is a group of disorders that cause red blood cells to become misshapen and break down.

Sickle cell osteopathy is the skeletal manifestation of sickle cell disease from three interconnected sequelae of the disease.

Salihu, therefore, said that “genotype test is crucial to reduce the increasing number of persons living with sickle cell disorder and break the painful agonising cycle of raising children with the disease.

“Premarital test offers vital health assessment for soon-to-be married couples as they are examined for genetic, infectious and
transmissible diseases to prevent any risk of transmitting any disease to each other and their children”.

The NOA president added that the association had been in existence for the past 45 years, saying that in spite of challenges faced with the proliferation of quacks in the country, the group will continue with humanitarian mandate in health development.

He stressed the need to promote orthopaedic education in the country, adding that the association must ensure the future generation of practitioners put it into consideration and given necessary tutelage.

Salihu stated that the association has engaged in free surgical interventions for the vulnerable especially children who were treated for different deformities around their limbs, as part of the activities of the 2022 AGM.

“Their various limbs were straightened through surgical interventions that were expensive. Each surgical case costs a sum of N15 million, but was done free of charge,” he said.

He however warned quacks in the country that the association would take necessary steps with the help of the government to bring perpetrators to justice.

The president of NOA also reminded members on the need for specialisation of their practices, adding that some members are already in notable institutions across the world for further training.

Speaking earlier, Dr Osagie Ehanire, the Minister of Health, represented by Dr Dada Adedamola, the Chief Medical Director (CMD) of Federal Medical Centre, Lagos, stated that the theme of the 45th AGM conference is apt, due to the high burden of the disease in Nigeria.

He however commended NOA on their efforts, adding that the country boasts of qualified experts to manage such disease.

Osagie pledged continual support of the government for the association in stemming the tide of sickle cell cases in Nigeria, as complication of the disease remained prevalent.

“Most people are not aware of their genotype and become aware after some complications. There is need for knowledge and information on the danger of this disease,” he said.

In his welcome address, Dr Bola Ahmed, the Chairman of the Local Organising Committee, said that 21 patients were beneficiaries of the free surgical outreach.

According to him, 31 surgeries were conducted free of charge with the support of the Kwara Government.

He said some of the surgical interventions are Correction of Foot Deformities, Spine Corrective Surgeries and Angular Deformities. (NAN)