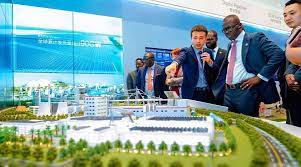 The News Agency of Nigeria (NAN) reports that the Conference had the theme: “Transforming Lagos State into a Smart City Hub in Africa – The Government’s Infrastructure Approach.”

Sanwo-Olu who was represented by his deputy, Dr Obafemi Hamzat, assured that his administration would leverage on the deployment of cutting edge technology to create improved and effective governance to the smart city project.

The governor noted that in achieving a 21st century economy, it required technology, especially the availability of an efficient and reliable internet service.

“The bedrock of a functional smart city is adequate and functional infrastructure.

“We are committed to improving the provision of adequate infrastructure to fast track the smart city project in order to optimise the limitless opportunities of a fully digitalised economy,” he said.

According to him, the widespread application of technology will create opportunities and enhance socio-economic growth.

Sanwo-Olu recounted some of the successes of leveraging on technology in furtherance of building a smart Lagos city that was globally competitive.

He said that the re-launch of the state residents’ card was part of the ongoing efforts to realise the smart city dream.

“The new residents card is an upgraded version of the former ordinary plastic to a smart card with embedded features for multipurpose uses in addition to identification purpose.

“The creation of a seamless payment system for our multimodal transport system with the launch of cowry card.

“And the digitisation of key government services, processes and procedures to improve efficiency, accountability and transparency,” he said.

The governor called for support, partnership and collaboration of the private sector in order to transform the state to a smart city hub.

‘’It is therefore geographically immune from the challenge faced by other states in the hinterlands vis-à-vis access to broadband capacity,’’ he said.

According to him, Lagos state is also the “brain-box” of technology innovation with the several data centers it hosts.

The commissioner, however, said that Lagos state, like the rest of Nigeria, was still far from achieving its full ICT infrastructure potentials.

He said that Nigeria still had huge infrastructure deficit and needed over 120,000 additional kilometres of fiber, from current figure of less than 60,000 kilometres, and about 40,000 additional Base Transceiver Stations (BTS) to meet the NNBP targets by year 2025.

Adewolu advised LASIMRA to assist in maximising opportunities from the NNBP for Lagos State by providing supportive permitting regimes.

“The constitution of the Federal Republic of Nigeria empowers states to approve physical infrastructure projects.

“Sadly, many States have weaponised this power for short-term revenue purposes. This needs to change, and Lagos state needs to take the lead.

“The economic activities engendered by an increased broadband penetration coupled with the consequent increase in taxable revenues from increased business activities far outweigh the short term revenues which inhibit the accelerated rollout of broadband infrastructure,” he said.

He encouraged LASIMRA to do more to streamline processes and ensure faster processing of infrastructure permits so as to encourage infrastructure deployment in the state.

Earlier in her address, Mrs Abisoye Coker-Odusote, the General Manager, LASIMRA, said that the theme of the programme was in line with efforts of the Lagos state government to position the state as a Smart City.

She said that the theme was also in line with key initiatives around the utility infrastructural space and areas that could be leveraged by stakeholders to enhance the execution of the smart City initiatives.

Coker-Odusote said that government was playing the role of coordination and funder by bringing different interests and stakeholders together.

She said that the move was to provide funding for digital infrastructure and demonstrator projects by ensuring that common standards and regulations were in place. (NAN)