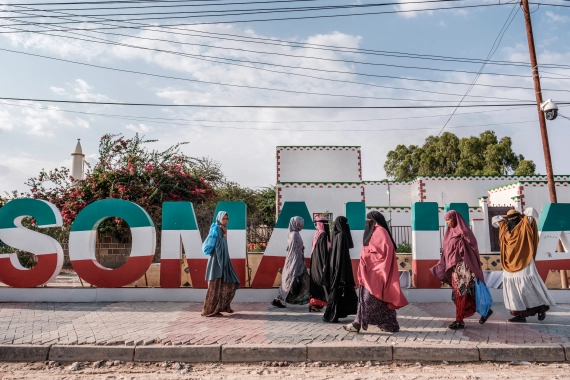 Women walk in front of a Somaliland sign in the city of Hargeisa. In a September 6, 2022, letter, the minister of information Suleyman Yusuf Ali, also known as Koore, said he was revoking CBA TV’s right to operate in Somaliland. (AFP/Eduardo Soteras)

THE Committee to Protect Journalists on Friday called on authorities in the breakaway region of Somaliland to allow the privately owned CBA TV broadcaster to resume operations and to desist from using bans to silence the press.

In a September 6 letter, the minister of information Suleyman Yusuf Ali, also known as Koore, said he was revoking CBA TV’s right to operate in Somaliland because the broadcaster’s license had expired and it had aired content that threatened peace in the region, according to a copy of the letter posted to Facebook by CBA TV, a statement by local rights group Human Rights Center, and an interview with Hussein Jama Haji Hasan, director general of CBA TV, who spoke to CPJ via messaging app. The minister’s letter did not cite specific content aired by the broadcaster.

CBA TV, which covers news and analysis about the Horn of Africa region, denied the allegations, saying its reporting is balanced; that permits allowing it to operate, issued in 2018 by the ministry of information and attorney general’s offices, do not expire, and that it complied with local tax requirements, according to Hussein, a CBA TV report, and a September 10 letter from the broadcaster to the ministry of information, which CPJ reviewed.

In its statement, the Human Rights Center questioned the legality of the minister’s order, saying that the minister’s letter accused CBA TV of breaching Article 45 of Somaliland’s press law, which he said prohibits media from propagating content harmful to the stability of Somaliland. However, the press law has only 32 articles, according to CPJ’s review of the law and the Human Rights Center.

“The closure of CBA TV’s operations on dubious and vague legal grounds is the latest act of repression in a fast-closing space for critical journalism in Somaliland,” said CPJ sub-Saharan Africa representative Muthoki Mumo. “Somaliland’s ministry of information should allow CBA TV to continue operating without interference or harassment, and authorities should nurture rather than undermine the work of journalists.”

Hussein told CPJ that after receiving the minister’s letter on September 7, CBA TV ordered its journalists in Somaliland to cease working, but he said the outlet was still broadcasting via satellite and posting content on its social media platforms from offices in Nairobi, Mogadishu, and Lagos.

According to Hussein, the closure in Somaliland, where CBA TV is headquartered, would significantly affect revenue flow and he was worried about how long the broadcaster could keep paying the salaries of about 48 staff members in the region. Hussein said CBA TV plans to challenge the ban in court. He added that the outlet’s audiences in Somaliland would lack local news coverage due to the operations ban.

“It is not only about us being blocked, but also about the freedom of our viewers to get information,” Hussein said.

CPJ has documented recent press freedom violations in Somaliland including the shuttering of the BBC’s operations in July and the detention of journalists in August.

He said he would respond to those queries but had not done so by publication time. An email to Somaliland’s ministry of information returned an error message; queries sent via Twitter direct message to the ministry also went unanswered. A phone number of Hassan Aden, Somaliland attorney general, did not go through when CPJ called and queries sent to him via WhatsApp and email went unanswered.