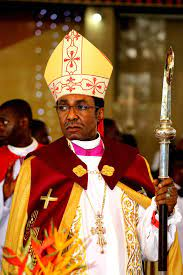 ANGLICAN Archbishop of Enugu, Most Rev. Emmanuel Chukwuma, has decried the lukewarm attitude of Enugu State Government and security agencies towards incessant unauthorized sit at home orders in the state.

Chukwuma made the observation at the Service of Songs for late nonagenarian, Dame Monica Okoye, held at the Cathedral Church of the Good Shepherd, Enugu on Wednesday.

Chukwuma noted that only Enugu State observed the unauthorized order in the South East Zone.

According to him, no such thing happens in Abia, Awka, Owerri and Umuahia, only in Enugu State.

“Civil and public servants in Enugu State are lazy otherwise, why should they obey an unauthorized order in the state.

“For two working days this week, civil servants did not go to work and they expect full pay at the end of the month,” he said.

He wondered why both the state government and security agencies also obeyed the order urging them to do something urgently to stop the illegal act.

One of the daughters of the deceased, Dr Ifeyinwa Nwaekwesi said her mother lived a remarkable, impressive and amazing life having been a contemporary of Queen Elizabeth 11.

Nwaekwesi, a health coach and CEO, Healthy Living, thanked all that mourned with the family.

Dame Okoye died on Nov. 15 at the age of a 97 and survived by nine children, many grand and great grandchildren.

The event was attended by former President General of Ohaneze Ndigbo, Chief Nnia Nwodo, governorship candidate of the All Progressives Grand Alliance (APGA), Chief Frank Nweke Jnr among other dignitaries.