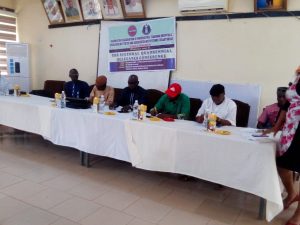 THE Senior Staff Association of Universities, Teaching Hospitals, Research Institutes and Associated Institutions (SSAUTHRIAI) have expressed optimism that the various meetings and negotiations with the Federal Government will end the ongoing strike action by the union.

Dr Ezekiel Popoola, the General Secretary of the association, made the assertion while speaking with the News Agency of Nigeria (NAN) on Wednesday in Ilorin.

Popoola spoke on the sidelines of the Research Institutes Sectoral Council Meeting and Quadrennial Delegates Conference in Ilorin.

NAN reports that the SSAUTHRIAI embarked on the strike to press home their demands on salary structure for members and other emoluments.

Their agitations also include the establishment of a regulatory body; National Research Institutes Commission (NARICOM) and inadequate funding of research institutes, among others.

Popoola explained that the association had series of negotiations and meetings with various ministries, adding that the research institutes are under the administration of 14 ministries and the presidency.

He noted that though negotiations are tough, however, members have called for a common platform for Chief Executive Officers to rub minds and reach resolutions on agitations of the union.

“It’s not easy, so far we have met with three ministries who have pledged to ensure resolutions are met as to bring about the end of the strike.

“The issue of gratuity for retirees is important issue to be considered. There is need for the Head of Service of the Federation to put this in consideration,” he said.

Also speaking, Mr Issa Aremu, the Director General of Michael Institute of Labour Studies (MINILS), assured the associations of his maximum support especially on the issue of gratuity for retirees, increment of salary and welfare for members.

Aremu also observed that gratuity should not be a substitute for the Contributory Pension Scheme but complementary for life time of service delivery.

“SSAUTHRIAI should take advantage of the Salary and Wages Commission to push for increase in salary and wages for members,” he said.

The director-general pointed out that the key to security in Nigeria is to pay workers, adding that workers must be well motivated.

Speaking also, Mr Danjuma Lawal, the Director in charge of Human Resources Management of MINILS, added that the institute can serve as a mediating body between the federal government and the association to bring an end to the lingering stroke action.

He noted that the director-general will do everything possible to ensure issues as resolved soon. (NAN)