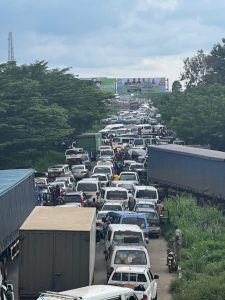 Traffic gridlock caused by the protesting students of the nation’s tertiary institutions under the aegis of the National Association of Nigerian Students (NANS) at the Gbongan flyover bridge in Osun on Thursday. [NAN-Photo]

The News Agency of Nigeria (NAN) reports that this was in continuation of the association’s nationwide protest on major highways against the lingering face-off between the Federal Government and their lecturers.

NAN recalls that the students started the protest on Tuesday at the Sagamu interchange, blocking all roads leading to Lagos, Abeokuta and the Southern part of the country.

The agency recalls that ASUU had on Feb. 14, embarked on indefinite strike on the premise of inadequate funding of public universities, among other demands.

NAN, also reports that the blockage, which started at about 12.30 p.m, left many motorists plying the road stranded with their passengers.

All entreaties to the aggrieved students by motorists and commuters, especially those going for one ceremony or the other did not yield any result as they refused bluntly to open the road.

Even, the presence of the security personnel, especially the police, Federal Road Safety Corps, could not help matter as the students insisted that they would not leave the road until their demands were met by the Federal Government.

The protesting students, armed with placards of various inscriptions, were chanting solidarity songs, saying that they were tired of staying at home and demanded an end to the strike.

Commenting, Emmanuel Olatunji Adegboyega, the South-West Coordinator of NANS, said the government should brace up as the students were tired of sitting idle at home.

Adegboyega said that the students would not relent until they go back to school.

He said: “We insist that government must fund education and not look down on children of the masses, because their own children are schooling abroad.

“We will continue to occupy the major roads live and better still, we will go to Abuja and ensure that we make our voices heard. But, we will not stop until ASUU strike is called off.”

Also, Mr Abidemi Adeleke, the NANS Chairman in Oyo State, said that only the Minister of Works, Babatunde Fasola had responded to the students’ protest through the media.

According to Adeleke, Fasola described our protest as illegal, but he didn’t see non payment of lecturers’ salaries as illegal.

“We are not moved by whatever name our protest is tagged, all we want is to return back to the classrooms.

“We are live now at Gbongan Expressway. Let them answer us and not tag our being on the highways as illegal, because we will not stop until we can go back to schools.

However, the NANS leadership later agreed to open the highway at exactly 3.00 p.m, after pleadings from the stranded motorists and commuters. (NAN)