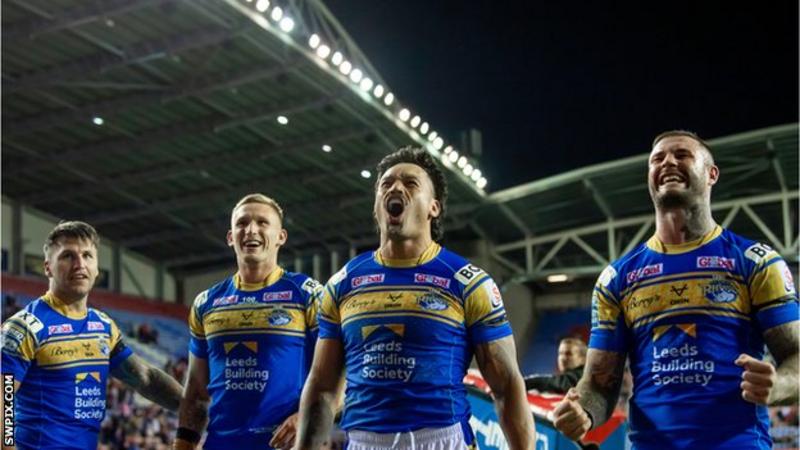 LEEDS Rhinos’ early season run of suspensions and injuries could be a major factor in helping them upset the odds to beat reigning champions St Helens in Saturday’s Super League Grand Final.

The West Yorkshire club looked like possible relegation candidates earlier in the year. Instead they ended up reaching the play-offs by the skin of their teeth after a late run of scintillating form.

And now, after winning away to Catalans Dragons and Wigan in the knockout rounds, they could make history if they win the title for a third time having finished the regular season in fifth spot.

It’s a year that club veteran Jamie Jones-Buchanan is only just getting his head around.

“When we started this season, there was an expectation,” Jones-Buchanan told the 5 Live Rugby League podcast.

“Everyone expected us to do well with the playing squad.”

However, a run of just one win in the opening 10 games led to coach Richard Agar stepping down and ‘JJB’, as he is known within the game, took temporary charge before the arrival of new head coach Rohan Smith from Australia.

“One of the things I’ve been reflecting on is the multitude of injuries and suspensions that we had at the start of the season. And that rolled on a lot through it,” Jones-Buchanan added.

“In that interim period, when I was in charge for six weeks until Rohan came, we relied on people like Morgan Gannon, who not too many months before was playing under-15s at Siddal [amateur club in Halifax].

“And people like Jack Sinfield, who was 17, and young Max Simpson – they were carrying the weight of Leeds Rhinos for a while.”

Getting them all back for the later stages of the season, relatively fresh because of their more limited game time, has given the Rhinos an extra energy for the run-in, according to Jones-Buchanan.

“Come the back end of the season some of the guys, who haven’t played as many games in Super League as many others have, have now started hitting their straps,” he continued.

“Without doubt, Rohan Smith has been the catalyst for that. He’s come in and lifted the potential of that group of people and they’ve started to realise that physically, mentally and spiritually that everything that they are doing as a group is exceptional.

“And that’s showing itself out there on the field. I imagine we’ll all look back and reflect on the season, on how it started, on that middle period, and hopefully how it’s going to finish.”

Being written off outside of their camp at times during 2022, following their early slump, has also given the season a different complexion from within.

“It’s a success whatever happens this weekend because I remember a poll at some point when they asked if Leeds would make the play offs and I think 89% said they wouldn’t,” added Jones-Buchanan.

“Now we find ourselves in a Grand Final. It’s been a spectacular year, one I haven’t reflected on enough yet, but there’s a lot of lessons to be learned for sure.”

Squad culture not ‘copy and paste’ across teams

Jones-Buchanan says one of the things he has had to learn this year is to put those glory years behind him when dealing with the current crop of Leeds players.

“One of the errors I made when I finished playing was this assumption that you could copy and paste the culture in a generation from one group to another,” he said. “It’s just not doable.

“When it’s reaffirmed with eight Grand Final rings and Challenge Cup medals, and memories of playing against the likes of Melbourne Storm in World Club Challenge games, it’s really hard to let go because you think it must be right. It’s validated by all these experiences.

“But in essence that was good for that period of time with that generation of people. But in 2022 it’s a completely different club.

“The environment at the club is very different to what my cohort experience was. We’ll bottle that up and we’ll treasure it forever, but I’m not sure how much you can paste of that onto this group.”

Smith has brought the ‘enjoyment back’

Smith’s input has impressed those within the Rhinos framework since his mid-season arrival, from players to coaches.

Prop Mikolaj Oledzki told the 5 Live Rugby League podcast that Smith had brought “enjoyment back” to playing and training, in his “simplifying things and getting us throwing the ball about”.

The Australian’s methods, not just on the training paddock, have inspired Jones-Buchanan to rethink his approach too.

“That’s one of the biggest things that Rohan Smith has impressed on me,” he said.

“Many are the things that we [the era Jones-Buchanan played in] wouldn’t [have done], he does with this group and this group thrives on it.

“It’s very much horses for courses. One of the biggest lessons I’ve learned this year is to take a step back, open my eyeballs to the biggest aperture and take that in.

“Because if you want to encourage people you’ve got to find out what their make-up is, not just as an individual but as a collective.

“It’s been challenging, it’s been one of the hardest years of my life, to let go of some of that confirmation bias. But we are where we are and success is shown on the pitch.”